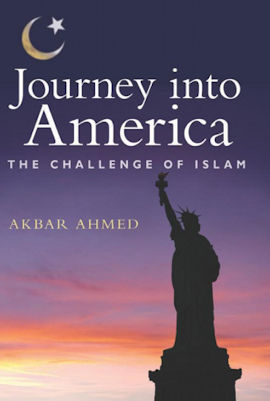 Days and weeks before the launch of the new book by anthropologist Akbar Ahmed called Journey into America: the Challenge of Islam, it was already reviewed in major Pakistani newspapers. “Usually it is Western anthropologists who study Muslim societies. It is encouraging to see a Muslim scholar returning the compliment by studying American society", Maleeha Lodhi writes in The News.

Accompanied by several researchers, Akbar Ahmed travelled for a year to over 75 cities across the U.S., meeting a diverse array of people and visiting more than a hundred mosques.

After (too?) much research on muslim issues and media focus, it seems that eveything has been said. But his book does not seem to be one of those numerous studies on “the integration of immigrant women". His book is also an ethnography of today’s America.

In an article in the Guardian, the anthropologist writes that he “realised that it was impossible to study Islam in America without studying America itself and its identity.”

This “reinterpretation of the competing influences that have shaped American identity” is, writes, Maleeha Lodhi, “fascinating":

Americans, Ahmed says, need to make a choice between the concept of the country fashioned by its Founding Fathers - universal, pluralist and tolerant - , or the post-9/11 vision “which is aggressive, self-centred and suspicious of, if not hostile to, “the other":

He traces the first and dominant primordial identity to the original white settlers of the 17th century. Fashioned by white Anglo-Saxon Protestant (WASP) settlers, this vision of a society based on justice and a rule-bound charter was however exclusionary, meant only for Christians, not Native Americans or those who were forcibly brought from Africa.

From that period also emerges a secondary identity from the pluralist tradition. This foreshadows the vision of the country’s Founding Fathers based on equality between and respect for all citizens, democracy, religious freedom, and rejection of slavery.

Dr Ahmed identifies a third identity with origins in the 17th century. This is the predatory identity which unleashed an aggressive impulse that saw Native Americans as heathens who had to be eliminated. It also justified slavery. This established the notion of zero tolerance: that any threat to society had to be permanently decimated by the full use of force. Compassion was seen as weakness and compromise as defeat.

This identity, Dr Ahmed argues persuasively, asserted itself in the post-9/11 period when America under Bush embarked on two wars and a path that saw it compromising its own laws and ideals and justifying torture and Guantanamo in the name of protecting the nation. The invasion of Iraq, the Patriot Act and secret detention centres were all actions consistent with the old predatory identity.

The book also includes a “thought-provoking comparison” between two founding fathers Thomas Jefferson and Mohammed Ali Jinnah, writes Rafia Zakaria in The Dawn. “Sadly it seems both Americans and Pakistanis are only too willing to eviscerate the commitments these two founding fathers made towards tolerance and religious pluralism.”

The anthropologist is according to Maleeha Lodhi “just as forthright in identifying the weaknesses and problems in the Muslim diaspora". He distinguishes between three traditions: mystic (Sufism, emphasises universal humanism), modernist (balance modernity with religion) and literalist (Salafis, adhere strictly to tradition) and concludes that “modernist Muslims have provided neither leadership nor a critical mass to change the community, while mistakenly dismissing literalists as being of no consequence.”

In order to “recreate the community’s self-image and extricate it from persistent identification with 9/11 and terrorism", Muslim American leaders need to look to the African American community. he recommends.

According to the reviewers (somehow I have the impression they’re a bit too positive…), this is a well-written book, and Daily Times reviewer Mahjabeen Islam even things it will be the “talk of the town“.

For more information see the book blog at http://journeyintoamerica.wordpress.com/ and the first chapter (pdf) as well as Ahmed’s posts at Huffington Post

Anthropologist Maximilian Forte continues his analysis of the “predatory” elements of American culture in his recent posts on Zero Anthropology, among others Team USA at the 2010 FIFA World Cup: Motivation Unthinkable without the Military and Militainment: U.S. Military Propaganda in the News Media, Hollywood, and Video Games

Interview with Arjun Appadurai: “An increasing and irrational fear of the minorities”

“Arabs and Muslims should be wary of anthropologists”

This entry was posted by admin and filed under religion cosmology, Us and Them, books, Northern America.

Many thanks for the link Lorenz. Very interesting post as well.

Being a Muslim convert from being raised in American Christianity is certainly a hard gear shift in perception and behavior. Islam’s strict traditionalism outdoes the casual religious practices I had when growing up. Also belonging to a Western Society that idolizes individualism, it was hard to not to perceive my learning through my own ethnocentric understanding, but with patience I’ve come to understand the reasons for the traditionalist practices. I completely appreciated this article.