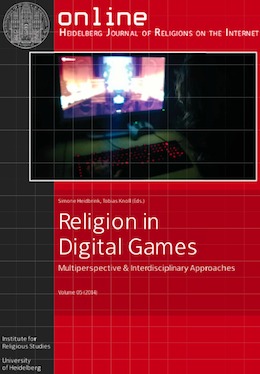 "Second Life is their only chance to participate in religious rituals": This seven year old post about the research by anthropologist Tom Boellstorff on the virtual world Second Life came into my mind when I heard about the new special issue "Religion in Digital Games" of the interdisciplinary Open access journal "Online. Heidelberg Journal of Religions on the Internet".

The journal is published by the Institute of Religious Studies at the University of Heidelberg and has just been relaunched and redesigned.

Religion in online games seems to be still a new topic in the university world.

"Until now this certainly huge field of research remains mostly untapped and digital games have only recently been declared an interesting object for scholars of religion", Simone Heidbrink, Tobias Knoll, and Jan Wysocki write in their contribution "Theorizing Religion in Digital Games- Perspectives and Approaches".

As universities generally are conservative institutions, Simone Heidbrink and Tobias Knoll start their introduction with an apology for leaving established paths:

When researching a rather new, unusual or controversial topic in nowadays academia it seems to be a new kind of “tradition” to apologize in great length for doing something the scholar thinks the readerships thinks he is not supposed to study (or something equally confusing along those lines), based on the assumption that it is scientifically unworthy, insignificant or plain nonsense. That was our experience with the topic at hand. (…)

In order to follow the apparently mandatory academic ritual of apologizing and legitimizing, we would herewith like to express our deepest regrets for publishing this special issue of Online – Heidelberg Journal of Religions on the Internet topics on “Religion and Digital Games. Multiperspective and Interdisciplinary Approaches”.

Religion plays a role in many games, as Simone Heidbrink, Tobias Knoll, Jan Wysocki show. This is also true for religious stereotypes that might be reproduced in "neglected media" like video games in more explicit forms - partly because these media are considered to be less relevant in cultural discourse and thus less subject to media critique.

They refer among others to Vít Šisler who in his research shows how Muslims are being stereotyped in different video games. The topic of the Middle East as war zone and virtual battleground has become even more significant in the post 9/11 era. Not only have the numbers of games with an objective of fighting terrorism increased significantly according to him. The stereotyping, the “othering” of the (virtual) Muslim counterpart have become even more racist as well.

Anthropologist: World of Warcraft can be good for your mental health

Play as research method - new Anthropology Matters is out

Cyberanthropology: "Second Life is their only chance to participate in religious rituals"

This entry was posted by admin and filed under religion cosmology, Us and Them, Open Access Anthropology and Knowledge Sharing, media, journal articles / papers, cyberanthropology, internet, interdisciplinary.