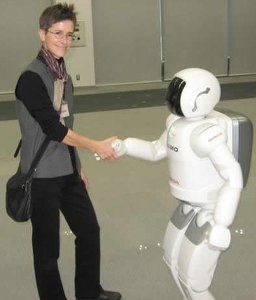 At home, robots are about to replace the role of the grandmother and in the industrial sector, robots are more popular than foreign laborers according to anthropologist Jennifer Robertson. Robertson is researching on the effects of robots on Japanese society.

At a seminar, Robertson spoke on the decreasing human birthrate and increasing humanoid robot population in Japan, the university newspaper The Daily Texan informs.

In the industrial sector, Japan prefers robots over foreign laborers “because machines do not enhance racial tensions by evoking wartime memories, as foreigners do", Robertson said (!)

But the country is according to the anthropologist more concerned with utilizing robots to help increase native births:

Because children require care at home, they can keep women from holding jobs. But in today’s society, many women need or want to hold professional positions. As mothers join the workforce, robots take over their household duties, thus increasing the workforce and the birthrate. (…) Robertson showed photos of cartoon-like machines with exaggerated features and colorful bodies. These were the robots such as Wakamaru, PaPeRo and Ri-man that babysit, tutor children and care for the elderly.
(…)
These robots transmit images to cell phones, thus allowing mothers to keep an eye on their children while away from the home. (…) Japanese children are obedient to their robotic caretakers, and the machines have replaced the role of the mother or grandmother in the home.

>> read the whole story in The Daily Texan

“Robots are expected to be in the 21st century what automobiles were in the 20th century,” Jenny Robertson said in an earlier article in The Michigan Daily. For more information on robots in Japan, see also two BBC-stories Japan’s rise of the robots and Japanese scientists have unveiled the most human-looking robot yet - a “female” android

The cultural nationalism of citizenship in Japan and other places

This entry was posted by admin and filed under technology, Asia.