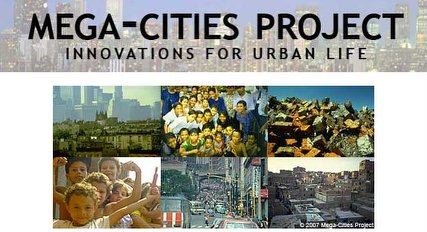 (LINKS UPDATED 21.9.2020) More and more people live in mega cities. Rather than fixating on investing in the countryside, donor agencies need to recognize that people want to come to the big cities. And rather than demolishing squatter developments one should integrate these self-made communities into the surrounding neighborhoods, anthropologist Janice Perlman said in a lecture according to Multi Housing News.

The cities whose populations are expected to increase the most Mumbai, Lagos and Mexico City etc) are according to the anthropologist also the least equipped to handle the massive influx of people. The world’s slums will likely become even more massive in scale, and this, in turn, will hinder the ability of many cities to be truly sustainable. However, according to Perlman, there are steps that can be taken now to avoid an ecological disaster.

The anthropologist is the founder and executive director of the Mega-Cities Project, a transnational nonprofit network that strives to aid urban dwellers around the world. It concentrates its efforts to make cities more socially just, ecologically sustainable, politically participatory and economically productive.

>> read the whole article in the Multi Housing News

According to the Megacities website, Perlman is about to finish a book on the dynamics of urban poverty in the favelas of Rio de Janeiro. The book’s working title, Marginality from Myth to Reality: Favelas of Rio de Janeiro, 1969-2005 is based on field research she has done over that period of time. This study documents what has happened to the original study participants of her 1969 research which became the classic book, The Myth of Marginality: Urban Politics and Poverty in Rio de Janeiro (UC Press, 1976).

As a young graduate student in 1968-69, during the height of the Brazilian military dictatorship I lived in three favelas in Rio de Janeiro and interviewed 250 residents in each.
(…)
I discovered that the prevailing stereotypes of favela residents (which I termed the myths of marginality) were “empirically false, analytically misleading and invidious in their policy implications” – as they were used to justify the eradication of favelas. My book created a paradigm shift from “blaming the victim” to recognizing migrants as highly motivated urban pioneers and from socio-cultural modernization theory to structural dependency theory.
(…)
How has life changed over the last three decades? (…) The answers are paradoxical. While the material condition of life has improved, the human condition has deteriorated. The fear of favela eradication has been replaced by the fear of being killed in the cross-fire between drug gangs and the police. Despite the return to democracy after the 20-year dictatorship, people feel more excluded and say they have less bargaining power than before; and despite community upgrading, the poor feel more marginalized than ever.

She has put online several papers on her research in Rio’s favelas, environmental justice and related issues.

Slum research: “Anthropology needs to engage in an activist way”

Anthropology of Trash: An anthropologist as garbage collector

This entry was posted by admin and filed under Latin- and Central America, development empowerment, applied anthropology, poverty.