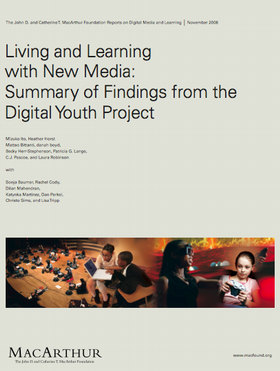 Many adults worry that children are wasting time online, texting, or playing video games. In the first in-depth ethnographic study of its kind, researchers of the Digital Youth Project found that the digital world is creating new opportunities for youth to grapple with social norms, explore interests, develop technical skills, and experiment with new forms of self-expression.

According to the report, youth could benefit from educators being more open to forms of experimentation and social exploration. Rather than assuming that education is primarily about preparing for jobs and careers, the researchers question what it would mean to think of it as a process guiding youths’ participation in public life more generally.

The report was presented at the annual meeting of the American Anthropological Association in San Francisco and is availbable online, as anthropologist Mizuko Ito, who lead the research, announced on her blog.

Youth use online media to extend friendships and interests.
They can be always “on,” in constant contact with their friends through private communications like instant messaging or mobile phones, as well as in public ways through social network sites such as MySpace and Facebook. With these “friendship-driven” practices, youth are almost always associating with people they already know in their offline lives. The majority of youth use new media to “hang out” and extend existing friendships in these ways.

Youth engage in peer-based, self-directed learning online.
In both friendship-driven and interest-driven online activity, youth create and navigate new forms of expression and rules for social behavior. By exploring new interests, tinkering, and “messing around” with new forms of media, they acquire various forms of technical and media literacy. By its immediacy and breadth of information, the digital world lowers barriers to self-directed learning.

New media allow for a degree of freedom and autonomy for youth that is less apparent in a classroom setting. Youth are often more motivated to learn from peers than from adults. Their efforts are also largely self-directed, and the outcome emerges through exploration, in contrast to classroom learning that is oriented by set, predefined goals.

“This was a large ethnographic project by far the most challenging and rewarding research project I’ve undertaken so far", Mizuko Ito writes. She is particularly proud of the shared report, which was “a genuinely collaborative effort, co-authored by 15 of us on the team, and including contributions from many others":

We took a step that is unusual with ethnographic work, of trying to engage in joint analysis rather than simply putting together an edited collection of case studies. We spent the past year reading each others interviews and fieldnotes, and developing categories that cut across the different case studies. Each chapter of the book incorporates material from multiple case studies, and is an effort to describe the diversity in youth practice at it emerged from a range of different youth populations and practices.

The report received a lot of media attention, see among others the San Francisco Chronicle and the Boston Herald

From housewife to mousewive - Anthropological study on women and Internet

Ethnographic Study About Life Without Internet: Feelings of Loss and Frustration