How do middle-class women in Calcutta understand and experience economic change? What impact is globalization having on the new middle-classes in Asia? Our reviewer Tereza Kuldova has again been lucky with her choice of books. For antropologi.info, she reviewes Domestic Goddesses: Maternity, Globalization and Middle-Class Identity in Contemporary India by Henrike Donner: 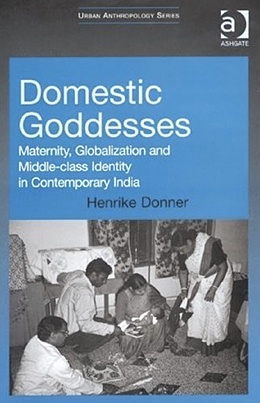 This anthropologically rich study based on an extensive ethnographic fieldwork brings us to the contemporary Calcutta and the homes of its middle-classes. It draws us convincingly right into the everyday domestic lifeworlds of the Bengali middle-class women, with all their concerns, ideas and ideals, sorrows, anxieties and joys.

Analyzing the middle-class women’s narratives, Henrike Donner explores the shifts in the meanings and lived experiences of marriage, motherhood, conjugal relationships and family values. Focusing on the roles the women play as wives, mothers and homemakers, she examines the various ways in which the Indian urban middle-class is produced and reproduced - be it through seemingly unsubstantial lunch boxes of the middle-class children or the preference of caesarean section among the middle-class women. She analyses the ways in which the discourses on class, family and marriage, which commonly favour the role of the housewife and stay-at-home mother in order to produce a perfect family, shape the lives of these women; and how these women in turn shape the contemporary Indian society through their daily practices and ideas.

In her own words this “study is a reminder that the conflicts over the meaning of economic reform are not played out on the public stage of electoral politics alone, but also within families, between generations and in the embodied experiences of citizens. If neo-liberalism is not seen purely as an ideology but as a set of institutions, ideologies and technologies that bring about specific discourses, my research shows how it reshapes the Indian middle-class family, and with it motherhood” (180).

The Introduction gives us an idea about the background of the study, its location and reflections on fieldwork method. The part discussing the positioning of the anthropologist - a white woman from the “West” - and the power relationships between the fieldworker and her subjects evolving on the basis of this categorization are particularly interesting and give us closer insight in how relations are negotiated and how they evolve through time.

The first chapter on Middle-Class Domesticities and Maternities presents absorbing theoretical discussion of motherhood, kinship and reproduction. In her theoretical discussion on and analysis of how motherhood is constructed and discussed by women and the ways in which it dominates and orders their lives, Henrike Donner continually reflects on how these discourses and practices surrounding motherhood relate to power relations in the society, how they reflect the hegemonic processes of change, the ideas about modernity, the Hindu nationalist thought and the socio-economic relations. Motherhood is thus turned into the institution par excellence through which the historical change is studied. This continual linking between the wider transformations in the society and the rich ethnographic detail through a modified lens is, I believe, the greatest contribution of the study.

The second chapter Of Love, Marriage and Intimacy brings us at the core of the middle-class obsession with the discussions of love and marriages, which centre on the topics of, arranged and love marriages, suitable spouses, arranging matches and weddings and much more. Again these discussions and rich ethnographic material is set within the context and framework of the wider discursive formations and collective histories, contextualizing for example metropolitan ideas of what makes a good match through wider analysis of changing relationships between women and men, daughters and parents, in-laws and their son`s wives. The empirical data and cases are used actively in a combination with theory in a balanced manner, and the presence of the anthropologist throughout the whole book makes the text more readable and interesting. Viewing marriage in terms of process, which changes its meanings and the ways it is perceived over the lifecycle and across gender is also one of the strengths of Donner’s approach.

The third chapter concerned with The Place of Birth, i.e. basically the medicalization of childbirth, the availability of health services and changing birthing practices, opens up in front of us the world of parenthood as understood by the urban Bengali middle-class women. It discusses parenthood as a public prove of sexual prowess, fertility and reproduction being crucial in making and expanding the social significance of marriage as well as in making and reproduction of the middle-class. Infertility on the other hand carries a great social stigma, the infertile couple not only symbolizes “sexuality without a purpose, ‘coupledom’ without a future, and personal loss” but also challenges “generally held ideas about marriage and the Indian middle-class family” (92).

Discussing several cases Donner analyses the changing birthing practices, the interesting popularity of the self-elected caesarean sections, and the domestic relations at the time of the women’s pregnancy and much more. Particularly the analysis of the popularity of the caesarean deliveries is very enlightening, bringing in the notions of class, pollution, social status and middleclassness. The caesarean deliveries distinguish the middle class from the low class woman, they are markers of class and affluence, they are “clean” and the convalescence takes a considerable amount of time, which the low class woman in opposition to the middle class one does not have. Caesarean sections thus manage status as well as pain, pollution and embarrassment during the birth.

The fourth chapter on Education and the Making of Middle-Class Mothers is concerned with schooling during the early years of childhood and “the way parenting is implied in institutional practices and the way intimate relationships between mothers and their children are informed by wider socio-economic transformations” (123). This chapter thus discusses a rarely investigated topic of contemporary parenting in India and the role of mothers. The analysis shows how the mothers reproduce the middle-class ideals and tastes through active parenting strategies and how the children actually become subjects of multiple practices resulting from the liberalization policies and processes.

The fifth chapter with the title Motherhood, Food and the Body explores the middle-class woman’s agency as a consumer and relates the analysis of consumption to that of gendered bodies and (re)production of middle-class through consumption patterns. She particularly focuses on the wave of “new” vegetarianism and the various meanings it has, from control of the woman’s sexuality to idioms of purity.

This study shows clearly that even thought there is an increasing number of nuclear families, love marriages and divorces in urban India, which are commonly seen as indications of the post-liberalization changes, “the patrilocal residence, arranged marriages and lifelong unions still constitute normative discourses, and are often reinvigorated” (181). But at the same time “the increased significance of privacy, conjugality and individualism among urbanites supports new socialities and gendered identities” (182).

the ambiguous and surprising outcomes of the processes leading to the new middle-class lifestyles, which oscillate somewhere in between ideologies of individualism and media representations of family ideologies, which depict the Indian middle-class as consumption- and family oriented, as well as thoroughly nationalist.

One of the shortcuts of the study, I believe, is that it is thoroughly restricted to the domestic sphere and the middle-class household and does not take into account how the production and reproduction of the middle-class through the work of women is staged in the public sphere; how it is played out in the daily interactions outside the home and how these interactions actually shape and bring into being the lived social hierarchies. The discussion of relationships with men and the men’s views is certainly a missing link in the broader connections, too, though maybe intentionally omitted; such a discussion and focus would give the analysis more depth.

This book is without any doubt a great contribution to current anthropological discussions on how globalization and consumer oriented economies change and influence the kinship and marriage systems, as well as on how the class hierarchies are produced and reproduced in the urban setting. It is a must read for any anthropologist or a student of anthropology concerned with the modernity in developing countries, globalization and kinship. But the clarity of the language, interesting issues raised and richness of the ethnographic detail will surely draw the attention of a much broader specter of readers.

I haven’t found much material about or by Henrike Donner online. But on this page you’ll find links to papers she has put online: Committed mothers and well-adjusted children: privatisation, early-years education and motherhood in Calcutta and The significance of Naxalbari: accounts of personal involvement and politics in West Bengal

This entry was posted by admin and filed under Asia, globalisation, gender, books.