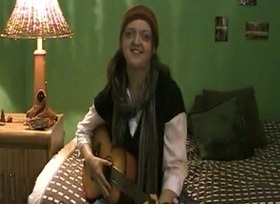 Dai Cooper’s Anthropology Song has fascinated people all over the world. Around 39 000 people have seen the video on YouTube so far, it was sent around via facebook, twitter, mailing lists, and was already shown in many anthropology classes. Maybe nobody has better explained what anthropology is all about.

I got curious and asked her if I may interview her for antropologi.info. I’m glad, Dai Cooper, who is now doing a Masters in Anthropology at University of Toronto in Canada, said yes. So here is the (email-) interview:

- What a great song! Sounds like you’re a professional musician, do you sing in a band?

- Hah far from it! I bought my guitar for $60 at a second-hand shop in Vancouver about two years ago and taught myself to play a little, mostly watching YouTube tutorials and with occasional insight from guitar-playing friends. I’ve always loved singing just as an expression of self. I think everyone can sing, and it’s great when people feel empowered enough to do so. But I don’t think you need to be professional to create or appreciate music.

- How did you get the idea to writing this song AND uploading it to YouTube?

- I just started grad school in a new city, and to be honest, I came up with the first two verses of this song one morning after a long night of writing and little sleep. I was kinda charged up (and a tiny bit caffeinated), it was just before class, and the words just came to me. I got all excited and started playing around on the guitar with them. The tune got stuck in my head, and it quickly became almost an obsession to write down and work out all the new lines. I wanted to be able to express all the reasons why I love and am inspired by Anthropology. A day and a half later I sat down in my room in my new little apartment and turned on the camcorder.

- YouTube just seemed like the best way to make that expression of awesomeness available to whoever was interested in seeing it; I originally wrote it with mostly my family and my Anthro professors and friends from my alma mater back at University of British Columbia (UBC) in mind, but it seems to have really resonated with a lot of people beyond that.

- Why do you address your parents in the song?

- I love my parents, and they’re definitely the people who have supported me the most through my education. They always pay really close attention to the things I’m passionate about, and I’m really grateful for that. At the same time, it’s challenged me to ask myself some of the same questions that they’ve had so what exactly is Anthropology, anyway? Why are you studying it again? and I think in many ways the song addresses some of those same questions. So the song is sincerely dedicated to them.

- I also think it adds a humorous element to frame the song in a way that insinuates coming out as an anthropologist to your family having to dispel some misconceptions and explain some new ways of thinking.

- What kind of reactions did you get?

- Really inspirational ones! I was just expressing happiness and inspiration through the song, and apparently that’s made a lot of other people happy and inspired too, which is wonderful. Anthropology to me is all about human connexions, and it’s been so amazing to feel like people from all over the world have been feeling those connexions with each other through the song. I’ve had profs in my new Toronto department come up to me and exclaim, you’re the girl on YouTube! So apparently it’s a great way to meet people, too! In addition to strangers, I’ve also heard a lot of positive comments from people back home; old friends and people in my old department, who I felt really close to, and its great to renew those links as well.

- It sounds that you could be invited to sing your song at conferences. What do you think?

- Hah actually several people have suggested that by now. I’d be super flattered if that happened! I did actually offer to play it at the AAA conference in December, it was half-joking, because I don’t think they’d take me up on it - but I’d just love to share the song and the sentiments behind it with anyone who likes it. It makes me happy.

- It’s interesting that you ask that actually, because one of the (many) inspirations that led up to me writing the song was watching Michael Wesch’s An Anthropological Introduction to YouTube, which is all about web 2.0 and thinking about internet forums as social spaces that allow people to connect and communicate in new ways. I think an anthropology of those networks and online spaces is something were hopefully going to see much more of in the near future, as it’s a fascinating subject.

- In maybe a similar way, music is probably one of the more powerful (and older) ways people communicate their ideas and humanity across culture and space and time as well. I know there’s a whole field of study called ethnomusicology that I don’t know much about, but it sounds like it would be great to write a song about

- Your interestes in anthropology and research plans?

- My own research throughout my undergrad came to focus on the production and significance of social spaces. I’ve also been focusing largely on an indigenous group called the Toba in northern Argentina, and especially their movements toward urbanization in barrios or shantytowns surrounding the big cities, where I actually got to spend some time living last summer. If anything has taught me about love, humility, poverty, generousity, and my own life here in Canada, it’s been that experience. I’m hoping to return there to conduct some fieldwork for my Master’s as well.

- Why did you choose to study anthropology?

- I think a lot of the reasons why I study Anthropology now come out in the song: seeking peoples stories, rethinking perspectives, and a common humanity. But as far as how did I get started, probably 95% of the credit goes to my first-year introductory anthropology professor back at University of British Columbia (UBC), Gaston Gordillo (who later became my advisor there), who is just an amazing person, passionate about the discipline and students and encouraging people to (un)think, and who continues to inspire me to this day especially as I’m now a teaching assistant (TA) and taking on that educational role myself, I find myself engaging my own students in many ways that I learned from him.

- And now you’re - according to your song - soon on the way to Vietnam and Peru?

- To be completely honest, Vietnam rhymes with Barack Obamas mom

But I’m glad it does, because one of my best friends is from there, and I actually would love to experience Vietnam. Peru I love. It’s a land of mystery to many, and also includes many stereotypes, but it has loved and challenged and embraced me in my travels through many highs and lows in my life. Perú te amo.

Thanks a lot for the interview!

UPDATE 24.10.09: Dai Cooper was asked to play this song at the AAA meeting in December!

I wonder if a second part to this song isn’t needed? One that takes on board the critiques that have been written about anthropology and the types of knowledge that we produce about people. I am (…) aware of the problems of our discipline and having worked with people who have had to and who continue﻿ to live in the shadows of anthropological knowledge about them, I wonder if you don’t gloss over that slightly.

That’s awesome and possibly the best constructive critique that’s been said. I agree that, being from a pretty personal perspective, the song really romanticizes the discipline, and you’re right, the effects of the production and dissemination of anthropological knowledge are more complex. If you want to﻿ nurture a creative streak, you’re MORE than welcome to write a new verse (as it says in the comments ^^) and post it as a video response, that’d be AWESOME!

Play as research method - new Anthropology Matters is out

Nice interview. It’s good to read that she’s been invited to perform at AAA meeting; it will give the even something fresh.

It is a great idea that you interviewed Dia

it is a nice interview

I enjoyed reading it.

Nice surprise was looking for Dai on face book and came across her song.Greetings to her from St. Vincent and the Grenadines.

I would like to contact Dai about hiring her to write a song for the AAA task force on climate change.

Hi Richard, sorry for my late reply, I have been travelling. I hope you were able to contact Dai. I don’t have her email address, we were messaging via youtube, she’s here https://www.youtube.com/user/Daionisio