The limitation of people’s freedom of movement based on their nationality (“global apartheid”) is maybe one of the biggest human rights issues nowadays.

One month ago I wrote about Shahram Khosravi’s auto-ethnography of illegalised border crossing. 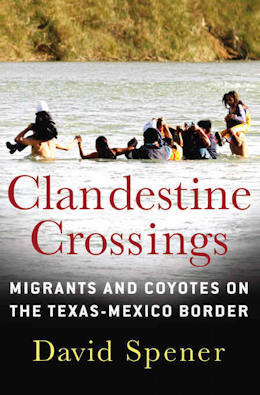 The Democracy In America blog at the Economist draws attention to a related book: Migrants and Coyotes on the Texas-Mexico Border by David Spener. The anthropologist spent eight years doing field work on both sides of the border.

Armed with latest technology, the U.S. does everything to prevent people from the South to enter its territory. Because border crossing is difficult, 90% of all illegalised migrants crossing into the United States through Mexico hired a smuggler (also called “coyote"). Human smuggling has become a $6.6-billion industry in Mexico.

The press presents human smuggling as a sinister organized-crime phenomenon. Spener argues that it is better understood “as the resistance of working-class Mexicans to an economic model and set of immigration policies in North America that increasingly resemble an apartheid system.

Publishing a book is not always the best strategy to spread knowledge. Therefore it is a good idea to set up companion websites as Spener has done. Here we find border crossing stories, articles and papers as well as images, maps and sounds.

As the Democracy in America blog reminds us: Even reaching the border is hard. Each year some 20,000 migrants are kidnapped for ransom in Mexico. Victims are made to give the phone numbers of relatives, who must pay upwards of $3,000 or more to get them released.

Migrants from Central and South America are particularly easy targets:

Illegal in Mexico, they must evade checkpoints throughout the country and risk deportation if they report a crime. Women and girls—about a fifth of the migrants making their way through Mexico—face additional dangers. Six out of ten are reckoned to suffer sexual abuse during their migration, according to Amnesty International, a human-rights watchdog.

For a global perspective, see the overview by the BBC: Walls Around The World

For free migration: Open the borders!Why borders don’t help - An engaged anthropology of the US-Mexican border

Online: On the Margins - An Ethnography from the US-Mexican Border

Interview with Sámi musician Mari Boine: Dreams about a world without borders

This entry was posted by admin and filed under politics, Us and Them, books, Northern America, migration.