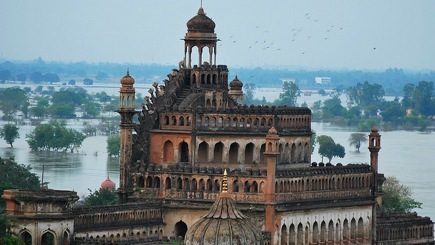 Why are some areas of this world more peaceful than others? In her master’s thesis Networks That Make A Difference, anthropologist Tereza Kuldova explains why the Indian city of Lucknow has remained peaceful throughout its history, even throughout such events as the Partition of India in 1947, and the demolition of Babri mosque in 1992 by Hindu nationalists in Ayodhya, less than 100 km from Lucknow.

“In contrast to the vast majority of studies concerned with communal violence in general and the Hindu-Muslim violence in India in particular, I opt the opposite point of departure, the one of communal peace”, Kuldova writes who is currently PhD fellow at the Museum of Cultural History in Oslo and author of several book reviews here at antropologi.info.

The heart of the peaceful nature of Lucknow is according to her “a particular blend of local history and networks of economic dependency which cut across the boundaries of class, caste, religion and locality. These networks are produced by the local embroidery industry, known under the name Chikan. Chikan is a traditional Muslim craft, and traded mostly by Hindu businessmen. In the last two decades there were more and more Muslims among the traders and Hindus among the embroiderers.

The Chikan industry gives employment to about 20 percent of the city’s population. It integrates people of different origins – rural, urban, lower class, middle class, men, women, Hindus, Muslims and creates according to her “an incredible network of mutual dependency, obligations and expectations".

Religion is often used by political leaders to polarize people. It is rarely the main source of conflicts. These economic networks of interdependency, writes Tereza Kuldova, neutralize the polarizing strategies of the political leaders and lessen the chances of the occurrence of the communal tension. They lead to the “priority of the processes of togethering” as opposed to the “processes of othering":

The growth of the industry and these networks, especially after 1990s, that is noticeably connected to the emergence and the ideology of the Hindu nationalism, has at the same time prevented the negative effects of this ideology, which have been violently felt in Lucknow’s neighbouring areas. This happened by expanding the cross-cutting networks and by turning a craft, which could have possibly been labelled as a “Muslim” craft, into a “traditionally Indian” craft. Chikan has been turned into embroidery which is worn by both Muslims and Hindus to express their Indianness, sense for tradition and fashion.

Additionally, Lucknow is by its inhabitants imagined as a peaceful and tolerant city, as the city of the Nawabs, rulers who bridged faiths:

Almost all accounts of the oral history that I gathered began like this: “In the times of Nawabs, the arts and architecture flourished, it was the time when a Muslim king danced as Lord Krishna…now where you can see that”. The Nawabs thus became associated with secularism; it is them who made Lucknow a “peaceful, clean and a neat city”

You don’t have to be born in Lucknow to be a Lakhnavi:

This imagination of anything or anyone as “Lakhnavi” goes in result beyond the dichotomy of Muslim vs. Hindu; it is rather about belonging to a particular place, which is populated by “Lakhnavis”, first and foremost.

The most persistent logic of the reasoning of why Lucknow is a peaceful city thus goes (tautologically enough) in the field as follows: “Lucknow is a peaceful city, because it is Lucknow, Lakhnavis do not fight, it has always been like that here and anyone who comes here just has to adopt that culture” (From a conversation with a Hindu businessman, 25.3.08.)
(…)
The discourse of the mythical past seems to work hand in hand with the economic structures and the social and economic networks in the city, creating both economic and discursive basis for the establishment of “relaxed” communal relationships.

As consequence of her findings, Tereza Kuldova encourages anthropologists to think rather and in terms of identifications than identities and in terms of networks than dichotomies:

Through the Chikan industry and through Chikan as a commodity, we can learn something about the fluidity of the social systems, about change and continuity, about the importance of the cross-cutting networks, about the discourses which govern the market and people’s choices and last but not least about the experience of modernity in India.

We have even seen that what is usually considered as unchangeable identities, particularly in the Indian context, namely the religious identities, are as mutable as any other. They are identifications, that might be at times stronger, at times weaker and at other times they might be replaced by new ones. People play with these identifications in a similar way as the popular Bollywood cinema does. (…) The concept of identification thus, being much richer, gives us more space to acknowledge the discursive shifts, which occur when the identifications are played out. At the same time as it acknowledges the situational and relational character of identity.

The network approach reminds us of the complexity of the social life and its situations, as well as of the impossibility to divide and classify the flow of social and economic interactions into clear-cut categories. (…)
Anthropology in general and I believe this study in particular, “has the authority and the ability to collapse a number of counterproductive dichotomies: the local and the global, the virtual and the real, the place-bound and the “non-place”, the universal and the particular. In real-life settings such contrasts evaporate” (Eriksen 2003: 15). “The “India”, where the past is inserted into the present and then projected into the future, questions the colonial dichotomies of “India” vs. “West”, “modernity” vs. “tradition”” (Favero 2005:24).

Why more scholarship on war than peace?

How to challenge Us-and-Them thinking? Interview with Thomas Hylland Eriksen

An Anthropological Challenge to Assumptions about War and Violence

Applied anthropology: A wedding ceremony in support of durable solutions in West Timor

This entry was posted by admin and filed under religion cosmology, Us and Them, Asia, journal articles / papers, cosmopolitanism.