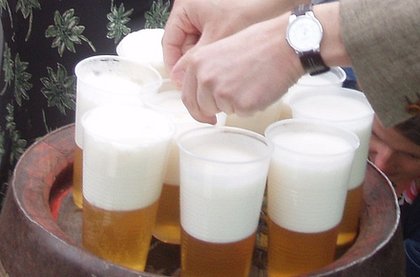 By studying beer cultures, you may learn lot about identity. In the United States, German-American identity is rarely marked. But given the association between Germany and beer, craft beer allows for the active negotiation of German-American identity, anthropologist Alexandre Enkerli writes in a draft of his paper Brewing Cultures: Craft Beer and Cultural Identity in North America, that he 's published on his blog.

Not only is the overwhelming majority of craft beer people male but masculinity and even virility are significant aspects of craft beer culture.

The negotiation of gender identity is an especially significant dimension of homebrewing, Enkerli writes. It often relates to the gender differentiation of food in general:

Historically, alewives and other brewsters have been responsible for domestic beer production. Contemporary (male) brewers often acknowledge the importance of women in the history of brewing. Yet the passage from a woman-centric domestic brewing practice to a male-dominated brewing industry and then to an overwhelmingly male craft beer culture rarely seems to represent a continuous process. It is as if male brewers, and especially homebrewers, were saying that despite their presence in the kitchen, they were still men.

Enkerli is both anthropologist and a craft beer enthusiast and has been homebrewer for several years.

PS: The picture was taken at a Norwegian-German wedding. For the wedding, two barrels of Bavarian beer were transported by the couple from Bavaria to Norway by car. Enkerli's point about negotion of German identity in the US might also be true for Norway.

This entry was posted by admin and filed under Us and Them, Europe, Northern America, journal articles / papers, food and drink.

Thanks a lot for the comments! (Too bad it didn’t trackback to my original entry.)
Been thinking through beer for a while and it does help us talk about different issues. During the conference, the discussion revolved around gender, social class, and distinctions between beer and wine.