Good news: British anthropologists take part in public debates. The ASA (Association of Social Anthropologists) issued a statement where they "condemn the use of terms like 'stone age' and 'primitive' to describe tribal and indigenous peoples alive today".

The official condemnation comes in the wake of controversial comments made on the BBC (not online!) by Baroness Jenny Tonge, the Liberal Democrat peer, who called the Bushmen of the Kalahari Desert 'stone age' and 'primitive.'

'All anthropologists would agree that the negative use of the terms 'primitive' and 'Stone Age' to describe [tribal peoples] has serious implications for their welfare. Governments and other social groups. . . have long used these ideas as a pretext for depriving such peoples of land and other resources.'

The ASA has become the latest supporter of Survival International's campaign against racism in the media which challenges the use of terms like 'stone age', 'primitive' and 'savage' to describe tribal and indigenous peoples.

Terms like 'stone age' and 'primitive' have been used to describe tribal people since the colonial era, reinforcing the idea that they have not changed over time and that they are backward. This idea is both incorrect and very dangerous. It is incorrect because all societies adapt and change, and it is dangerous because it is often used to justify the persecution or forced 'development' of tribal peoples. The results are almost always catastrophic: poverty, alcoholism, prostitution, disease and death.

Other supporters of this campaign include prominent journalists such as John Simpson, John Pilger and George Monbiot.

According the Washington Times, the American Anthropological Association did not return calls for comment. 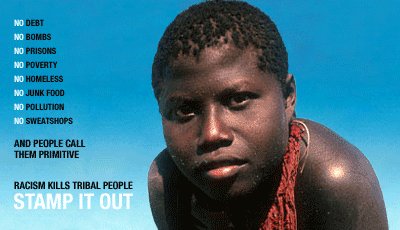 As I've mentioned earlier, several African scholars argue that the idea of tribe promotes misleading stereotypes and that "anyone concerned with truth and accuracy should avoid the term "tribe" in characterizing African ethnic groups or cultures".

In their paper Talking about "Tribe" Moving from Stereotypes to Analysis, they argue that:

Black Britain sheds more light on the use of this term. Several scholars, among others sociologist and cultural historian Lez Henry say that Survival and the ASA should also examine their use of the terms ‘tribe’ and ‘tribal.’ Henry says, people in Africa who live simple agrarian lifestyles are often seen as ‘primitive.’ Such notions served as justification for the colonisation of countries designated as ‘third world’. For Ekwe Ekwe, the term ‘tribe’ conjures up images of being unsophisticated and away from technological advancement.

According to Survival, they are guided by the United Nations in their definition of the term ‘tribe.’:

“Survival uses the term ‘tribal’ peoples, partly because we need a way to describe the type of people that we are working with. The term ‘indigenous’ can be used as well and often is.”

"The ASA does not support the use of the term 'tribal' to describe people...We share your concerns about the use of the word in perjorative ways in the same vein as primitive, etc.

"However, we do support the overall aim of the campaign which is to change perceptions and work against racism and outdated ideas of social evolution. Hence we wish to support Survival International's aims even if the wording is difficult."

Our obsession with the notion of the primitive society

Primitive Racism: Reuters about "the world's most primitive tribes"

"Good story about cannibals. Pity it's not even close to the truth"

Ancient People: We are All Modern Now - Debate on Savage Minds

This entry was posted by admin and filed under Us and Them, Africa, persons and theories, San-bushmen.

This whole ‘tribe’ thing is something of a specialty of mine. Two classic sources people might be interested in reading are “The Concept of Tribe” by Morton Fried and “The Illusion of Tribe” by Aidan Southall.

A tribe is a type of community. It does not imply them to be primitive unless you are ignorant of what the term really means. We assume too much of words. Tribe is really eh same as saying “suburb or rural area.

I’d rather say we assume too little of words and reflect too little about it. If you use “tribe” the way you described, that’s fine, but as shown here, it’s mostly used in a different way.

I was looking for that statement. It’s not popping up after clicking the link.

-I should have saved it way back then for reference.
Alas.

Thanks for letting me know. I will check the links by Monday

I have updated all links. The ASA statement is no longer to be found on the ASA website. But a copy is available here in the internet archive (scroll down the page a bit)

This subject is outside my area of expertise, so I’m asking for your advice. Is it appropriate to describe an item which used to be called ‘Primitive Art’ ‘Tribal Art’ instead? ‘Tribal Art’ seems to be the preferred term at present, but is there are better term? I would like to be accurate and communicatively effective in whatever terms I use, and this includes avoiding giving offence. Many thanks

Reading the statements above you will have to conclude that “tribal art” is not much better than “primitive art", is it? I would not use it and would try to find a more precise term instead. What exactly do you with to describe?

The word “tribe” is used to describe groups of baboons, chimpanzees and gorillas. How about : “kin-ordered societies", because that is what they are. In Suriname I used Indigenous and Maroon nations.

We need to get rid of all derogatory terminologies