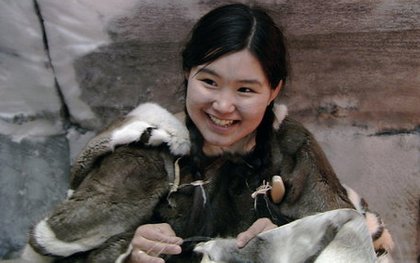 A new film by Inuit film maker Zacharias Kunuk (53) explores how missionaries force-fed Christianity to the Inuit in the 1920s. It's called The Journals of Knud Rasmussen. Before its official world premier at the Toronto International Film Festival, a preview was held for Kunuks home community Igloolik, a cultural hub of the Arctic, 2,800 kilometres north of Toronto. Gayle MacDonald from The Globe and Mail has been there and reports:

The frigid temperature (30 C below) does not faze these people, who came in droves -- some by prop plane from as far away as Qaanaaq, Greenland; and Nunavut's capital, Iqaluit -- to watch Kunuk's latest cinematic creation. (...) "One of my friends left the seal hunt early so that he could get here before the show starts," Kunuk, himself an avid hunter, adds proudly.
(...)
The shy filmmaker explains that his new film, shot in the relatively balmy months of April and May last year, is the story of explorer Knud Rasmussen, who travelled through this area in the 1920s, chronicling the conversion to Christianity of the great shaman Avva (played by local resident Pakak Innukshuk) and his willful daughter Apak (Leah Angutimarik).

The local Inuits appreciated that he took on taboo topics:

Some say they liked Atanarjuat, based on an Inuit legend, better. Others attest to being equally touched by this film, about the last great Inuit shaman, Avva. But all say they were glad Kunuk took on a taboo topic: shamanism, which the early missionaries dubbed devil worship, and which still sits uneasily with some of the town's most religious Anglican, Roman Catholic and evangelical residents.

Kunuk's production company, Igloolik Isuma Productions is according to the article one of the few success stories, periodically employing hundreds of local people as actors and film crew while injecting several million dollars into the economy. The people, by and large, are poor. Suicide (especially among those under 20), alcoholism, drug use and spousal abuse are rampant.

This entry was posted by lorenz and is filed under indigenous people / minorities, religion cosmology, inuit, Arctic / Northern Regions.