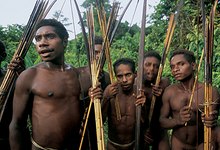 (via del.icio.us) If you miss "good old-style" stories about cannibals in far away places like Papua or New Guinea, read this story by Paul Raffaele in the Smithsonian Mag. It starts like this:

For days I've been slogging through a rain-soaked jungle in Indonesian New Guinea, on a quest to visit members of the Korowai tribe, among the last people on earth to practice cannibalism.

And about cannibalism: A local guide with "dark eyes" explains:

It's because of the khakhua, which comes disguised as a relative or friend of a person he wants to kill. "The khakhua eats the victim's insides while he sleeps," Boas explains, "replacing them with fireplace ash so the victim does not know he's being eaten. The khakhua finally kills the person by shooting a magical arrow into his heart." When a clan member dies, his or her male relatives and friends seize and kill the khakhua. "Usually, the [dying] victim whispers to his relatives the name of the man he knows is the khakhua," Boas says. "He may be from the same or another treehouse."

I ask Boas whether the Korowai eat people for any other reason or eat the bodies of enemies they've killed in battle. "Of course not," he replies, giving me a funny look. "We don't eat humans, we only eat khakhua."

The killing and eating of khakhua has reportedly declined among tribespeople in and near the settlements. Rupert Stasch, an anthropologist at Reed College in Portland, Oregon, who has lived among the Korowai for 16 months and studied their culture, writes in the journal Oceania that Korowai say they have "given up" killing witches partly because they were growing ambivalent about the practice and partly in reaction to several incidents with police.

Still, the eating of khakhua persists, according to my guide, Kembaren. "Many khakhua are murdered and eaten each year," he says, citing information he says he has gained from talking to Korowai who still live in treehouses.

Two men approach through the gloom, one in shorts, the other naked save for a necklace of prized pigs' teeth and a leaf wrapped about the tip of his penis. "That's Kilikili," Kembaren whispers, "the most notorious khakhua killer." Kilikili carries a bow and barbed arrows. His eyes are empty of expression, his lips are drawn in a grimace and he walks as soundlessly as a shadow.

The other man, who turns out to be Kilikili's brother Bailom, pulls a human skull from a bag. A jagged hole mars the forehead. "It's Bunop, the most recent khakhua he killed," Kembaren says of the skull.

Three years earlier I had visited the Korubo, an isolated indigenous tribe in the Amazon, together with Sydney Possuelo, then director of Brazil's Department for Isolated Indians [SMITHSONIAN, April 2005]. This question of what to do with such peoples—whether to yank them into the present or leave them untouched in their jungles and traditions—had troubled Possuelo for decades. "I believe we should let them live in their own special worlds," he told me, "because once they go downriver to the settlements and see what is to them the wonders and magic of our lives, they never go back to live in a traditional way."

So it is with the Korowai. They have at most a generation left in their traditional culture—one that includes practices that admittedly strike us as abhorrent.

>> read the whole story in The Smithsonian

>> BBC about the Kombai (Korowai)

On Papua Adventures we read:

Due to this very recent exposure to outside influences, the Korowai tribes are not as open and welcoming to tourists as the Yali, Dani and Lani for example. They remain on guard and suspicious of ways different to their own. This does of course make for an exciting and truly adventurous visit flying in by chartered Cessna from Jayapura to Yaniruma and trekking into Korowai country by foot and canoe.

UPDATE: Anthropologist Sarah Hewat comments: "Good story about cannibals. Pity it's not even close to the truth"

Our obsession with the notion of the primitive society

Is this anthropology? African pygmies observe Britains in TV-show

Ancient People: We are All Modern Now

Primitive Racism: Reuters about "the world's most primitive tribes"

This entry was posted by lorenz and is filed under indigenous people / minorities, culture traditions, Us and Them, Pacific Oceania.

Funny coincidence - I just read that Spiegel article someone links to at ethnolog on the Like A Savage show wherein a Himba girl is quoted who intends to calm down the upset visiting german girl: “Dont be afraid. We dont eat humans.”