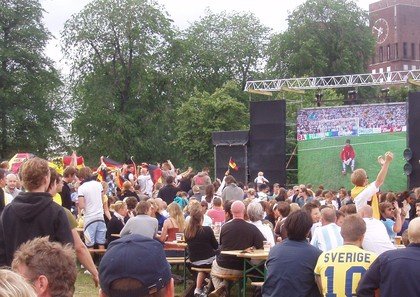 Swissinfo interviews anthropologist Fabrizio Sabelli about the enthusiasm of Swiss fans during the World Cup. According to Sabelli, it's driven by a need for a collective ritual and not nationalism:

We're currently going through a pretty dull cultural period, which offers few gatherings like the World Cup, and people need them. They want to get together because they are increasingly lonely. And this solitude is not a uniquely Swiss malaise – it is found in all contemporary societies. Everyone needs rituals but there is a dearth of them in our globalised society.

I think it's simply about rediscovering a sort of collective feeling shared at a celebration and above all the thought of a potential victory.

This Swiss team is made of different backgrounds, yet it doesn't prevent members from presenting a united front under the Swiss flag. This, he says, is "an effect of the magic of sport ". Nevertheless, he doesn't believe that football can have a determining influence on how we perceive others.

>> read the whole interview on Swissinfo

Is the Football World Cup a peacemaker?

Rituals - mechanisms for both creating solidarity and for increasing conflict

Yoo Seung-gi: Sports Nationalism and World Cup. A look at the 2002 and 2006 football festivities (OhMyNews)

This entry was posted by admin and filed under Us and Them, sports.