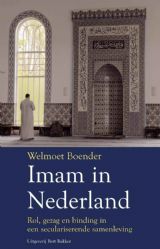 Participants in the debate on Islam often overestimate the authority and influence of imams. The role of the imam is especially limited when it comes to so-called “second and third generation immigrants". This is the conclusion reached by anthropologist Welmoet Boender in her dissertation Imam in Nederland, for which she was awarded her doctorate at the University of Leiden on Tuesday, according to expatica.com:

Boender’s research shows that not only the imam in the mosque defines appropriate standards and values and behaviour for the faithful, but television sheiks, internet imams, friends and family members and (translated) books also play a role. (…) In the public debate the imam is often seen as an instrument to integrate Muslims in Dutch society. (…) In light of the limited role that imams play for many Muslims, he will most likely fall short of this task.

>> read the whole story on Expatica.com

The dissertation is not online (yet?). I have not found any information in English. For those who do read Dutch, the blog Closer by Martijn de Koning of course provides more information in his post Imam in Nederland - Welmoet Boender.

I’ve found an older texts by Welmoet Boender though Imams in the Netherlands: An Impression.

Doctoral thesis: Towards a transnational Islam

Islam in Europe: Mainstream society as the provider of conditions

Islam in Morocco: TV and Internet more important than mosques

What does it mean to be Muslim in a secular society? Anthropologist thinks ahead

This entry was posted by admin and filed under religion cosmology, Europe.

It’s interesting… I waa talking to muslims on http://www.muslimsmigle.com about this and there is a real different reaction. It really seem down to the individual. Lookg forward to grabbing a book on it