Burma’s protesters may have been silenced, but we must continue to support them, writes Brendan Barber in The Guardian. But maybe we should not focus too much upon the courage of the monks. Muslims in Burma are persecuted, not only by the military, even by the ‘peaceful’ monks according anthropologist Gabriele Marranci: 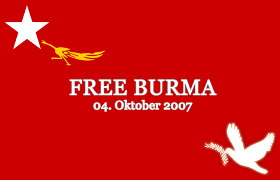 From an anthropological viewpoint, the revolt in Burma is particularly interesting for an anthropologist specialised in Muslim societies and communities. There are two elements that attract my attention. First of all, how this revolt is represented by the western mass media and secondly, the near total lack of reference to the drama that the Muslim minority, the so called Rohingya Muslims, have experienced in the last three decades. There are some hard stereotypes which affect how the mass media represent religions, and consequently, how ordinary people understand religions.

Muslims in Burma are a persecuted minority - a story that the mass media neglects to inform us, he writes. The omission, when compared, is according to the anthropologist “not very dissimilar from the western attitude towards other Muslim minority and refugee tragedies".

The Rohingya Muslims live mainly in the North of the Rakhine State and represent, officially, 4% of the entire Burmese population, but represent 50% of the population of Rakhine state (previously known as Arkana) itself. (…) In 1784, a Burmese king, Bodawpaya, annexed Arkana to his domain. This provoked a long guerrilla war with the Muslims, which saw, according to historians, more than 200,000 Arkanese killed. Many of the local Muslim population, at that time, were reduced to slavery and forced to build Buddhist monasteries. (..)

Muslims in Burma are not considered to be citizens. They have no rights and often suffer discrimination and indiscriminate killings. Many of them, in particular after 1962, had to flee the country and still today live in refugee camps in Bangladesh, which actually do not welcome them. Although Muslims have taken active part in the 1988 revolt, and paid the consequences more than the Buddhist population, the majority of monks and Buddhists in Burma have anti-Muslim sentiments, in particular based on the fear of possible intermarriages.

Pamphlets glorifying race purity and Buddhism and actually reinforcing anti-Muslim sentiments have been distributed since 2001 (i.e. Myo Pyauk Hmar Soe Kyauk Hla Tai or The Fear of Losing One’s Race). These inflammatory publications, preaching against the Muslim minority, as well as rumors spread about Muslims raping children in the streets, provoked a series of monk-led riots against Muslim families and the destruction of mosques. Muslims were killed and mosques destroyed, and again the Rohingya Muslims had to flee to Bangladesh.

Everybody hopes that the Buddhist monks can succeed in mobilising the population in a sort of Intifada. Some Muslims, I know, are repeating their Inshallahs in the not so distant Rohingya refugee camps in Bangladesh. They hope that the end of the military junta means the end of their oppression.

Nonetheless, a question remains, after such strong monk-led anti-Muslim campaigns which were also reinforced by the welcomed ‘Bushit’ rhetoric of ‘war on terror’: would the new, certainly Buddhist, regime accept the history and the existence, as Burmese citizens, of Rohingya Muslims? Or, would the new regime, like their predecessor generals the Muslims as an easy scapegoat?

A few days after his blog post, mainstream media has started writing about the discrimination of muslims and minorities in Burma - but without reference to the monks, see the CNN-story Myanmar’s ethnic minorities suffer a ‘hidden war’

UPDATE According to South Asia Analysis Group, the Burmese muslims in Rakhin “have strongly come out in support of the uprising against the military junta spearheaded by the Buddhist monks, students and others". On 26 September 2007, the Rohingyas and Rakhaings had jointly participated in the demonstration staged by the Buddhist monks forming human chains in Akyab chanting the slogan: “We are a family and we are travellers in the same boat, we Burmese citizens need to be united without regard to religion, class or race.”

Supporters of Burmese protestors from around the world are planning a global day of protests on 6 October according to the Democratic Voice of Burma.

Wear red shirts on friday - Anthropologists on the protests in Burma?

George Monbiot: Let’s put pressure on the companies responsible. Western interests in Burma contribute to the oppression of its people

The Rohingya have certainly gotten one of the worst deals in Burma, but the mainstream media is really reporting on them no less than they report on the Arakanese, or Kachin, or Naga, or any of the other ethnic minorities. It has only been very recently that Washington has noticed the Chin and Karen, and only because of concerted lobbying efforts by certain groups. The deliberate portrayal of these groups as mainly Christian probably does have a lot to do with it, though. Of course,there’s no doubt that Bush himself will never speak out on behalf of the Rohingya. His moralizing platitudes and expressions of outrage don’t really do anyone any good, though.

It’s worth noting that many of the Buddhist-Muslim conflicts that occasionally erupt in western Burma are instigated by government thugs. I’m sure there were many genuine monks who participated in the incident you refer to, but it’s a fair bet that there also government provocateurs who set the thing off or egged things on.

There are a lot of prejudices across all ethnic groups fueled by junta propaganda. The ethnic minorities have good reason to resent the ethnic Burmese, but the lack of information flow within the country means there are a lot of prejudices all around. There are people in other parts of Burma who honestly don’t even know the Rohingya exist. Everyone has a long road of reconciliation ahead of them, but it’s promising that many of the communities in exile are already working on this. As long as leaders from the ethnic states are excluded from the upper eschelons of government, though, whether military or otherwise, the situation for minorities will not improve.

Thanks for your comment. Yes, it sounds plausible that many of the Buddhist-Muslim conflicts are instigated by government thugs. It would not have been the first time that governments use religion or ethnicity in this way. Somewhere I’ve read that the monks are divided concerning the protests. Some do support the government, some do not.

One Blogger (Ko Htike?) wrote, that attacks on muslim mosques were initiated by militaries or mercenaries in robes and not perpetuated by “normal” monks.
While there is a sub-message of “modern medias dont’t report about good muslims", my experience with the common information-networks is, that the role of muslims within the protest is rather highlighted and given respect, maybe to engage Malaysia more. By the way, the christian minority receives the same discrimination and persecution.

We find any hints of historical facts that muslims settled in the Land of Rakhine. Now, just like in other countries, Rakhine face being cheated by muslims, immigrants from Bangledesh.