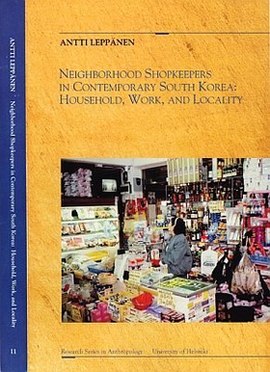 Another anthro-blogger has published his dissertation. Antti Leppänen has been on fieldwork among neighborhood shop keepers in South Korea. His interest in this toipc was "aroused by the visible ethnographic difference between my native Finland and the Korea of neighborhoods and marketplaces with its multitude of shops and the colorfulness, restlessness, disorder, and shabbiness of the urban scenery marked by shop signboards, from which my interest moved to people behind the visual façade".

But that's not the whole story as he writes:

The article that particularly directed my attention to the keepers of small businesses in South Korea in the first place was Laurel Kendall’s study (1996) of shamanism in Seoul in the 1990s, in which she discusses the phenomenon that the majority of the patrons of shaman rituals she encountered were shop owners, restaurateurs, and proprietors of small companies.

She suggests that the apparent ease with which the shamanistic rituals, earlier practiced mainly to cure illnesses, have now turned to ensuring entrepreneurial success and providing wealth, lies in a “calibration” of those practices to meet the contemporary arbitrariness of the market and the political economy (ibid: 521–2)

He conducted his field research during the aftermath of the Asian currency crisis, colloquially termed at the time as the “IMF crisis,” which highlighted the social and cultural circumstances of small businesskeeper in a specific way.:

The livelihoods of small-scale entrepreneurs became even more precarious than before; self-employment became an involuntary choice for many middle-class salaried employees who were laid off; and the cultural categories and concepts of society and economy – South Korean capitalism – were articulated more sharply than before.

Although the keepers of small businesses occupy approximately one fourth of the population in active work force, the livelihoods of these people and their cultural and social worlds have according to Leppänen rarely been in the focus of social science inquiry.

"But We Are Still Native People" - Tad McIlwraith's dissertation is online

Thesis: How does EU influence the life of farmers in Finland?

This entry was posted by admin and filed under Asia, globalisation.

Thanks for the plug! It’s also good to see what I’ve written - even though I should be ready to defend all that on May 11…

Good luck! It’s allowed to publish it before it was defended?