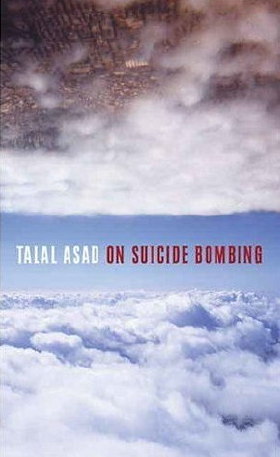 I’ve finished reading Talal Asad’s new book On Suicide Bombing. It belongs to the category of books I like most: It challenges common assumptions, makes us think (not so important if you agree with him all the time or not). By showing that the world is more complex, that you can look at the phenomenon from many angles, Asad does his job as anthropologist well.

In case of suicide bombing, one of his points is that suicide bombers might not be so something that special: Is there really a big difference between soldiers at war and suicide bombers? What actually is terrorism? What kind violence is labelled as “legitimate” and why? What role do common ideas about “civilized” and “uncivilized” people play in this discourse?

My argument is directed against thinking of terrorism simply as an illegal and immoral form of violence and advocates an examination of what the discourse of terror - and the perpetration of terror - does in the world of power.

Instead of a review (which I’m going to write in Norwegian), here some selected quotes.

I’ll start with the Epilogue

Western states (including Israel) have now massacred thousands of civilians and imprisioned large numbers without trial; they have abducted, tortured, and assasinated people they claim are militants and laid waste to entire countries. (…) In the long perspective of human history, massacres are not new. But there is something special about the fact that the West, having set up international law, then finds reasons why it cannot be followed in particular circumstances. I find this more disturbing than the sordid violence of individual terrorists.

It seems to me that there is no moral difference between the horror inflicted by state armies (especially if those armies belong to powerful states that are unaccountable to international law) and the horror inflicted by its insurgents. In the case of powerful states, the cruelty is not random but part of an attempt to discipline unruly populations. Today, cruelty is an indispensable technique for maintaining a particular kind of international order, an order in which the lives of some peoples are less valuable than the lives of others and therefore their deaths less disturbing.

The perception that human life has differential exchange value in the marketplace of death when it comes to “civilized” and “uncivilized” peoples is not only quite common in liberal democratic countries; it is necessary to a hierarchial global order. (…) All this is familiar stuff, and yet our media and our political potboilers remain obsessed with the ruthlessness of jihadists and the dangers of an unreformed Islam.

Terrorism: The distinction between terrorists and armies at war

If the motive of military commanders is complex (they kill noncombatants but wouldn’t if they did’t have to), however, couldn’t the same be said of the terrorist whose killing of civilians is at once deliberate and yet coerced? He has reached the limit; he has no option left - or so he claims, when he argues that in order to try to prevent “the coercive transformation of (his people’s) way of life”, he must carry out immoral killings. If he kills enough civilians (so he reasons), perhaps those who are politically responsible will respod in the desired way.

So: it is not cruelty that matters in the distinction between terrorists and armies at war, still less the threat each poses to entire ways of life, but their civilizational status. What is really at stake is not a clash of civilizations (a conflict between two imcompatible sets of values but the fight of civilization against the uncivilized. In that fight, all civilized rules may be set aside.

War is (…) a collectively organized, legitimized, and moralized game of destruction that is played much more savagely by the civilized than the uncivilized.

So how unique is suicide bombing? If it is special - and I believe that in a sense it is - that is not because of the motives involved. (…) The uniqueness of suicidebombing (…) resides, one might say, not in its essence but in its circumstances.

Explanations of suicide fighters tend to focus on the origin of motivation. (…) That reason is often - not always - seen as being in some way pathological. Or as being alienated - that is, as not properly integrated into Western civilization.
(…)
Strenski’s redescription of motive in terms of the concept of sacrifice offers a religious model by means of which suicide bombing can be identified as “religious terrorism”. And that appellation defines the bomber as morally underdeveloped - and therefore premodern - when compared with peoples whose civilized status is partly indicated by their secular politics and their private religion and whose violence is therefore in principle disciplined, reasonable, and just.

In a recent unpublished article, May Jayyusi insists that suicide fighters must be understood in relation to new forms of political subjectivity that have been formed in the context of resistance to the particular powers that circumscribe them (46). (…) The stress here should be not on violece as such but on spontaneous action when legal political means are blocked.

Robert Pape, a political scientist, collects figures. He insists that statistics show suicide bombers must be understood as employing a strategy of war:

"I have spent a year compiling a database of every suicide bombing and attack around the globe from 1980 to 2001. (...) The data show that there is little connection between suicide terrorism and Islamic fundamentalism, or any religion for that matter. In fact, the leading instigator of suicide attacks is the Tamil Tigers in Sri Lanka, a Marxist-Leninist group whose members are from Hindu families but who are adamantly opposed to religion (they have committed 75 of 188 incidents).

Rather, what nearly all suicide terrorist campaigns have in common is a specific secular and strategic goal: to compel liberal democracies to withdraw military forces from territory that the terrorists consider to be their homeland. Religion is rarely the root cause, although it is often used as a tool by terrorist organizations in recruiting and in other efforts in service of the broader strategic objective."

(…)
Pape is right to suggest that these incidents must be set in the context of what are in effect miniwars of rebellion. But he does not mention something about the states attacked that I think is more important than their liberal democratic status: their powerful armies. The insurgents are faced with an adversary that posseses formidable military weaponry as well as methods of controlling civilian populations in occupied territory that are often very effective, and this superiority cannot be met directly

The right of liberal democratic states to defend themselves with nuclear weapons - and this seems to be accepted by the international community - is in effect an affirmation that suicidal war can be legitimate. This leads me to the thought that the suicide bomber belongs in an important sense to a modern Western tradition of armed conflict for the defense of a free political community: To save the nation (or to found its state) in confronting a dangerous enemy, it may be necessary to act without being bound by oridinary moral constraints.

Horror at Suicide Terrorism: Why do Westerners express horror at suicide terrorism?

In the Abrahamic religions, suicide is intimately connected with sin because God denies the individual the right to terminate his own earthly identity In the matter of his/her life, the individual creature has no sovereignty. (…) In antiquity, by contrast, suicide was neither a sin nor a crime, although it was typically the elites, to whom that freedom was a personal entitlement, whocould legitimately take their own lives. Political authorities could offer suicide to members of the elite as a legal option to being judically executed (Socrates is perhaps the most famous example)

Why do Westerners express horror at suicide terrorism - what is so special about it? (…) Warfare, of course, is an even greater violation of civilian “innocence”, but representations have sedimented in us so as to see that in principle war is legitimate even when civilians are killed that in principle death in war (however horrible) are necessary for the defense of our form of life. Here the language of “civilization” and “barbarism” comes readily to hand rather than the more superficial “clash of civilizations”

In the suicide bomber’s act, perhaps what horrifies is not just dying and killing (or killing by dying) but the violent appearance of something that is normally disregarded in secular modernity: the limitless pursuit of freedom, the illusion of an uncoerced interiority that can withstand the force of institutional disciplines. Liberalism, of course, disapproves of the violent exercise of freedom outside the frame of law. But the law itself is founded by and continuosly depends on coercive violence.

If modern law seeks to found or to defend a free political community with its own law, can one say that suicide terrorism (like a suicidal nuclear strike) belongs in this sense to liberalism? The question may, I think, be more significant than our comforting attempts at distinguishing the good conscience of just warriors from the evil acts of terrorists.

This entry was posted by admin and filed under politics, religion cosmology, Us and Them, books, Northern America, Middle East.

Another simple-minded attempt to mix up guerilla-warfare and suicide-bombing. As suicide-bombing is not even analyzed within its ideology, understanding has to be waited for. The similar tactic in Sri-Lanka is enough “fact” for the autor, to keep silent about, what really should be talked about: That those attacs in Sri-Lanka are directed mostly against military aims and that the aims of the struggle are just secessionism. The suicide-attac of Islamism are deeply rooted in literalism and anti-semitism. They have not any cause in rational military reasoning or an intolerable state of being, but alone in anti-semitism an religious fanatism. They generate out of a patriarchy that supresses men and women, sexuality and joy. The enemy is associated with jews and apostates, while both stand for each other as the ultimate evil, that must be eradicated.
Whereas a modern, liberal army tries to break armed forces for rational purposes under the laws of war, islamic suicide bombing tends to hurt and kill civilians, that are marked as totally evil. What the autor also mixes up: It is not Sri-Lanka, that has a relevant number in suicide missions, be they military or directed against civilians. It is Iran, that sent thousands of kids for mine-sweeping with plastic keys from taiwan around their necks to open the doors of paradise. It is Iraq, where terrorists celebrate their macabre party of death in the name of Islamism. And least: It is the wall around israel, that decreased the number of islamic suicide bombings.
The peaceful islamists with their anti-americanism and their anti-semitism are fruitful bearers for the recruitment of suicide bombers out of peaceful europe, out of africa, indonesia, india etc.
It is absurd to call this an unfair military struggle, while the terrorists are fed by billions from iran and other oil-rich states, are supported by european development aid, can buy their weapons in Austria, in Germany, in China and from anywhere they want via “peaceful” traders in Quatar etc. All this with the moral and intellectual support of european lefties, the UN, that go common sense with Hisbollah and Hamas, and with officials from sweden, scandinavia, etc.
They will always seem weak to those, who imagine an unbeareble “superpower” of US and Israel and so feel sympathy for the self-declared enemies of civilization.

thanks for the post. I agree that this book by Asad is brilliant in the thought-provoking way it unsettles categories. It’s anthropology at its best.

I taught a couple of chapters from the book to advanced undergraduates and they were stimuated by the way the reading made them reflect on what they took for granted.

I just read this book for my class at the University of Chicago. It was brilliant.