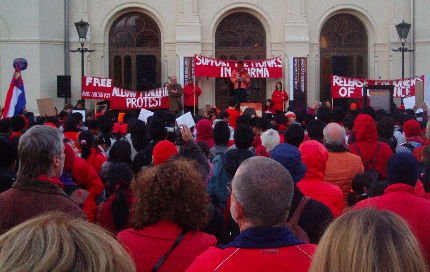 Wear red for Burma: Several thousand people at the demonstration in Oslo 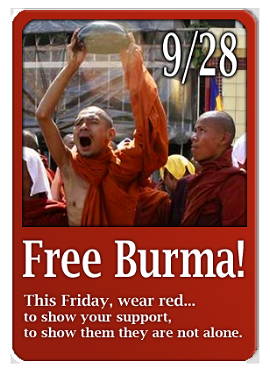 “Wear a red t-shirt in solidarity this friday!” “Light candles in your windows on Friday night to honour the victims of the demostrations.” Pro-democracy protest marches in Burma have entered the tenth day. Burmese soldiers have detained about 200 Buddhist monks and fired shots as they attempt to disperse thousands of anti-government protesters in Rangoon.

Any comments by anthropologists on the situation in Burma? By now I’ve found four:

Monique Skidmore, medical anthropologist in The College of Arts & Social Sciences at the Australian National University (ANU) has been conducting research in Burma since 1994. 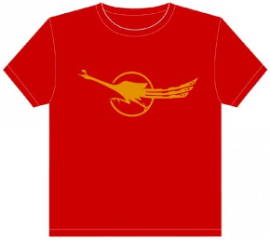 In the Australian online magazine Crikey she explains, that the the current protests stretch its roots stretch back to 1962 “when the Burmese armed forces, led by General Ne Win, usurped power from Burma’s democratically elected government of Prime Minister U Nu. General Ne Win ruled the country by fear, informers, propaganda and isolation. A civil war has waged since then, with estimates of the loss of life at up to 10,000 each year.”

Today’s street protests are furthermore “the culmination of a campaign for democracy being coordinated by the ’88 Student Generation, the activist movement in exile, the labor movement (embodied by Su Su Nway, now in hiding), monks, and the National League for Democracy.”

Coordination is difficult given that most mobile phones are illegal as well as use of the internet, she writes: “Burma’s first blog appeared last week showing the first day of the monk protest in Rangoon. It only took the military regime 24 hours to shut it down.”

>> Monique Skidmore: The Burmese people have had enough

Sometimes Burma is also called Myanmar. Myanmar is actually the official name, the BBC explains: The ruling military junta changed its name from Burma to Myanmar in 1989, a year after thousands were killed in the suppression of a popular uprising. Rangoon also became Yangon.

The name change is a form of censorship, says anthropologist and editor of Anthropology Today Gustaaf Houtman in the BBC article Should it be Burma or Myanmar?

Houtman has written a book that is available online (free) called Mental Culture in Burmese Crisis Politics. Aung San Suu Kyi and the National League for Democracy. It is also available on Google Books. Read also an interview with Houtman on The Culture of Burmese Politics.

update: In the New York Times story Karma Power: What Makes a Monk Mad anthropology professor Ingrid Jordt contributes with some orientalitic statements when she explains that the monks’ power comes from their role in bestowing legitimacy on the rulers:

“Legitimacy in Burma is not about regime performance, it’s not about human rights like the West. It is something that comes from the potency and karma bestowed by the monks. That’s why the sangha is so important to the government,” she said, referring to the Buddhist hierarchy and the spiritual status that its monks can convey. “They are actually the source of power.”

UPDATE: Anthropologist Gabriele Marranci tells a story that the mass media neglects to inform us: Muslims in Burma are persecuted, not only by the military, even by the ‘peaceful’ monks: >> Gabriele Marranci: The other, invisible suffering of Burma


FOR MORE INFORMATION ON THE SITUATION IN BURMA SEE:

BBC News also has a story about how Burma cyber-dissidents crack censorship and tell the world what is happening under the military junta’s veil of secrecy.

Nobody thinks wearing a red shirt is gonna change the situation. Did you actually think so? Now THAT is really stupid.

Nobody really thought demonstrating against the Iraq war in Oslo, where I live, or any other place in the world would for that matter, would make Bush change his mind either. Point is, we still did it, it’s the biggest demonstration in Norwegian history.

This entry was posted by admin and filed under politics, Asia.

Free Burma!
International Bloggers’ Day for Burma on the 4th of October

International bloggers are preparing an action to support the peaceful revolution in Burma. We want to set a sign for freedom and show our sympathy for these people who are fighting their cruel regime without weapons. These Bloggers are planning to refrain from posting to their blogs on October 4 and just put up one Banner then, underlined with the words „Free Burma!“.