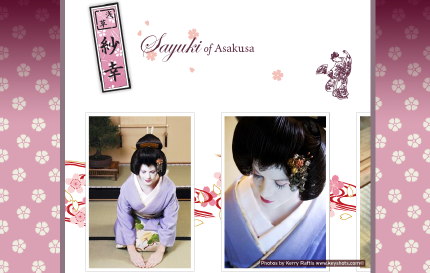 A documentary film-maker and academic with a doctorate in anthropology from Oxford University, Fiona Graham has just become what she says is the first non-Japanese in 400 years to debut as a geisha. But she hasn’t become a geisha for private reasons: She is now recording her life on film according to The Independent:

Sometime soon, she says, the world will see the results: a rare, scholarly inside look into one of the most closed societies in Japan. “It will be unique,” she insists. “Most Westerners who have tried to write about the traditions have failed because they never really lived the life. I’m going to represent the society that I’m living in now, as it is.”

Graham (or Sayuki as she now is called) has been doing anthropological fieldwork in Asakusa - one of the oldest of Tokyo’s six remaining geisha districts - for the past year, living in a geisha house (okiya), and participating in banquets as a trainee. She first came to Japan on an exchange programme from Melbourne aged 15. Fluent in Japanese, she has spent time working in Japanese companies and as a journalist.

It seems that it was during her fieldwork she learned to become a geisha:

The training involves learning how to walk, talk and dress, and master several skills, such as the tea ceremony and the three-stringed shamisen, and her own speciality, the Japanese bamboo flute, which she practises every day. Then there are the rules of being in an okiya, or geisha house.
(…)
Her duties will include attending parties at these venues, pouring drinks and entertaining guests. “Everything is carefully rehearsed,” she explains. “When I open a sliding door I have to be on my knees, and stand up. Then close the door again on my knees. Learning what kimono to wear and when … there are many, many little customs like that.” Despite a year of training, she says she is still “not confident” about choosing the appropriate kimono to wear.

According to Fiona Graham, Geishas are “strong, independent businesswomen who control their own lives. They were among the first independent women.”

>> read the whole story in the Independent

>> first coverage by the Telegraph

This entry was posted by admin and filed under culture traditions, Asia, fieldwork / methods.

I was wondering if Sayuki could explain how she came into contact with her okiya and how she was accepted and such. I’m looking to join one as well, being American it’ll be difficult, but I’d like to at least work as hard as I can to become what I want.

Have you checked her website http://www.sayuki.net/ It says “For information about how to call geisha, or to book dinner with geisha at a tea-house, just contact Sayuki via this website. Sayuki is planning to start a blog, in the meantime please sign to her Facebook fan page so she can keep in contact with you.”

I believe the American Liza Dalby was the first ever foreign geisha.

of course. it’s easy to learn languages when you’re young.

lorenz i would like to thank you so very much youve put my hopes up even more your defintley a angel and i know im overflowing you with questions wich i am very grateful and u sure are a good person i would just like to ask i know this maybe silly but do you knock on the doors in japan? and what city is most likley to accepts me because i would either like to go to tokyo or kyoto could u maybie choose a suitable city for me thank you very much for all your awnsers

I would like to add, that it much easier to learn, when you are living in that country. Learning from books and talking with teacher would give you the base, but you wouldn’t hear the language music. Because every language has his own melody. And to get know it perfectly you should visit the country for couple of weeks (after courses of course).

im having a japanese tutor teach me japanese

Wow, next year Japan. The best thing is to travel around and find out which is best for you. You can’t decide that here

Liza Dalby was the first anthropologist to conduct fieldwork amongst Geisha and to be known as such in 1975, as aoi-me no geisha.

You ought to read her ethnography is a classic and a must!