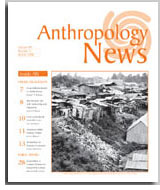 Educators complain about plagiarism. But it is not principally because material is too readily available that students copy and paste material from the internet to their papers. It’s because new forms of authorships are emerging online, anthropologist Susan D. Blum writes in Anthropology News March 2008.

Social websites like Wikipedia challenge the romantic notion of the author as the individual genius:

While the romantic notion of the author emphasized creation in a vacuum, without influence, touched only by inspiration from the individual’s genius, the new collectivized idea of the author celebrates the kind of creativity that comes from selecting, from accumulating a pastiche, a patchwork, a sample of others’ work. The line between creation and what “copyright fundamentalists” regard as theft is now completely— and consciously—fluid.

Collectively, one after another, contributors add to or edit Wikipedia articles, without directly requesting credit or payment. The living product is quite essentially collaborative, an accretion of many people’s words belonging to everyone and Common Sense and anthropological Sense no one simultaneously.

Sharing music, video, text and images is routine and simple on the “digital commons” with YouTube, Flickr and other file-sharing interfaces. Items often follow a circuitous path before they end up on some- one’s iPod or hard drive.

In some ways our students have become folk anthropologists, speaking out about the impossibility of singularity, the shared quality of discourse, the reality of fragments of texts incorporated into every utterance (or written document) and the collective nature of cultural creation. Now that’s a story!

>> read the whole article “The Internet, the Self, Authorship and Plagiarism” (pdf)

This is one of five articles on “Online Engagement” in Anthropology News March 2008.

This is a very interesting piece, thanks for posting it. I share the author’s approach. I also find myself increasingly uneasy about plagiarism policies which seem to be reaching extremes, such that a sentence that is not paraphrased “enough” can constitute plagiarism, even with specific and detailed attribution.

In addition, I have personally been found guilty of plagiarism: of plagiarizing myself. I tend to work from a single database of notes and ideas, so it’s not difficult to imagine that I might repeat myself on certain topics at different points. One publisher used some rather sophisticated software that could point out all the instances where what I had written had previously been written by me in other publications–select phrases and sentences. I was asked to get permission…to use my own words. Also, attribution to myself was not enough. Please, sit back, and try to absorb the absurd extremes that these bizarre rules are reaching. We are dealing here with certain fundamentalist attitudes about self and ownership that simply make little sense. In this example, I am the non-owning owner of my own words.

The post and the article in AN do well to shed light on the fact that our agency is frequently to be found in composing a bricolage of elements of other works, that this is normally the case, and that if we wanted to we could reference every single phrase we utter (in fact, some authors in journals seem to be aiming for that, as if to prove they did their readings, their homework, and it’s a bit sad to see really–you got your PhD, you did your research, I am certain you did a lot of reading).

So what is original? What does come from me and only me? The most “original” thoughts I have ever had were in dreams, inspired and conditioned by experience in a waking state of course, and possibly would make no rational sense if put into words. If it were really original, nobody would understand it.

The only problem that I do not have with plagiarism issues has to do with students who have copied and pasted from one single source and who, even worse, make up phony references for each paragraph from this single source, to make it look like they have consulted a wide range of works.