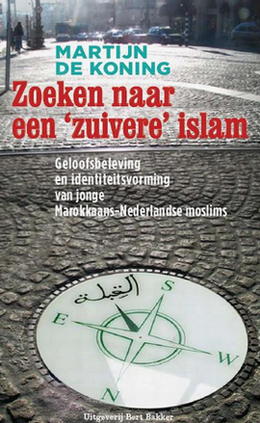 Our fellow anthro-blogger Martijn de Koning was awarded his doctorate at the Free University of Amsterdam last week.

In his Ph.D. thesis he shows how Islam has become the most important frame of reference for Moroccan-Dutch youth to reflect upon who they are and what they want to be.

In the late 1990s, the general perception was that young muslims were turning away from their religion. But things went differently, he says in an interview with Radio Netherlands. Young Dutch Moroccans are increasingly turning to their religion.

According to Martijn de Koning this is a direct result of the current polarisation of the debate on Islam:

Even before 9/11 there was already an increase in interest for religion among young Moroccans. But once the debate on Islam flared up, their interest increased enormously. They were continually asked about their Muslim identity; not just by the media, but also by school mates and teachers and by people at their sports club. They started looking into Islam so that they could answer these questions.

These group of young Muslims searched for an identity with which they could distinguish themselves from Dutch society as well as from their parents:

They wanted a pure Islam, without compromise. Not an Islam that had been watered down because they happened to live in the Netherlands. Nor did they want an Islam peppered with Moroccan traditions.

The Islam they found was not the traditional type from Morocco. They found their answers on the Internet in the conservative, Saudi-Arabian version called Salafism, the anthropologist says:

It is a form of Islam with clear rules, which makes a clear distinction between good and evil. An Islam which is stricter and more orthodox than that of the older generation, but nevertheless seemed to provide better answers to their complicated lives in modern Dutch society.

>> visit his blog (in both Dutch and English)

This entry was posted by admin and filed under religion cosmology, Us and Them, Europe, books, persons and theories, journal articles / papers.