Divorce does not belong to Hindu tradition, anthropologist Livia Holden was told when she started her research in India 14 years ago. But is this true? Tereza Kuldova reviews for antropologi.info Holden’s new book Hindu Divorce. A Legal Anthropology.

Anthropologist Livia Holden has been on 16 months of fieldwork over the course of 12 years in a village in Madhya Pradesh, India. With the help of the case studies of several women she challenges popular belief and earlier anthropological studies.

Here is the review: 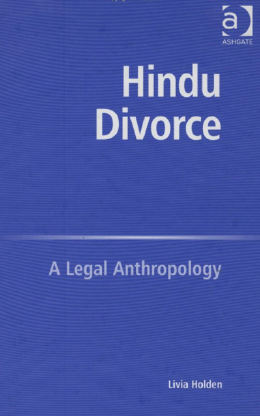 Livia Holden’s book Hindu Divorce presents an invaluable and to a certain degree also provocative re-examination of the praxis and legal status of Hindu divorce and remarriage, both in its past and present manifestations. Being an anthropologist, Livia Holden has the necessary first-hand experience with the actual practices of Hindu divorce and remarriage, at the same time as she connects these with the greater framework of the official law at the national level and even traces the implications of her findings transnationally.

Her examination of the divorce practices and remarriage is based on 16 months of fieldwork over the course of 12 years in a village in Madhya Pradesh, India. Over these years she had the opportunity to follow her informants, their stories and to develop deep relationships.

With the help of the case studies of several women (p. 69-124), which she has gathered over this period, she proves that contrary to the popular discourse in which Hindu marriage is considered indissoluble, and even contrary to the most legal and even anthropological studies, it is possible to find textual, historical and even contemporary evidence of customary provisions for divorce and remarriage.

The mainstream view of the Brahmans and other upper-caste Hindus, as it is codified in the Laws of Manu and other classical texts, which claims that marriage - solemnized according to the sacred rites prescribed by the ancient religious texts - is indissoluble, is contested on the basis of the customary law and practice.

It is also this view which served the British when developing the Anglo-Hindu personal law, as they gave priority to the religious texts and naturally also to the upper-caste views on law (p. 14). This codification led to even greater general consolidation of this idea, which is again what is reflected in most of the anthropological and law treatises.

In 1955 the Hindu Marriage Act was passed. This act guaranteed divorce for all Hindus and has saved customary practices of divorce. The emphasis on customary law and practices is important here, because, as Livia Holden points out, it would be a misconception to believe that most Hindu divorces take place through the juridical process in the civil courts, it is rather the customary law which prevails.

In addition “the inclusion of custom in the realm of the legal has the unique advantage of overcoming the fictional opposition between normative and non-normative behaviors, or between official and alternative normative orders that fix society within the limits of a privileged and totalizing cultural system” (p. 11). And it thus corresponds more to what her empirical data clearly show, i.e. that these customary provisions for divorce and remarriage function even among Brahmans and other high-caste Hindus, even though they are commonly perceived as practices of the lower castes.

She claims firmly that “dissolution of marriage did not only exist from ancient times; it was available to women and it was also widespread among the Hindu upper caste” (p. 5).

Being inspired by the feminist anthropology she also provides throughout her book an account of “how the mainstream Hindu discourse of gender imbalance shapes the legal discourse of law and how, in turn, the official legal discourse shapes Hindu society” (p. 19). Relating her empirical observations to the law discourse and theories on gender, she shows that customary law may actually provide more scope than the statutory personal law for the woman to negotiate successfully the conditions of her existence. She provides an analysis of the problem whether and if so how does the Hindu divorce and remarriage constitute a certain way out for women in the situations of matrimonial crisis.

In this context she presents several of her cases in which she also discusses such topics as arranged and child marriage, dowry, bigamy, domestic violence and interestingly also manipulations of custom and of official law. She further discusses the treatment of the Hindu divorce in the framework of national official law and its various relationships to the customary law and discusses the effects of the official law for the women.

“in specific circumstances Hindu women can successfully negotiate the end of an unsuitable matrimonial tie and remarry to secure better lives for themselves and their children; but for an understanding of peculiar techniques, which are part of the women’s legal awareness, it is necessary to see beyond positive law, to where the non-state law can inform or even substitute for state-law a perspective of legal pluralism that is something more than plurality of law” (p.218).

This book is no doubt a great contribution both for anthropology and for the study of law in India. Connecting the different levels of analysis it provides a coherent picture of the state of affairs. The possible direction of future research in this area might lie in the focus on the Hindu divorce and remarriage in the urban areas, especially among middle classes.

As my own fieldwork experience suggests, divorce and remarriage among Hindus in villages, even among higher-caste Hindus was generally possible, precisely on the basis of the customary law as pointed out above. But in the urban areas on the other hand the higher-castes acted more conservatively and generally restricted women who left their husbands to remarry, and even women themselves felt that it would be inappropriate. Investigating these processes which go hand in hand with modernity and which to a certain degree can be considered as the products of modernity, might thus be a fruitful scenario fur further research.

But except for the undoubtedly remarkable contribution of rethinking of the Hindu divorce and remarriage in various areas, the book is also striking in its degree of self-reflexivity. The chapter 2 (p. 27-68) is devoted to the discussion of the theoretical and methodological insights and reflection over these. It is very instructive in its open discussion of the changing role of the anthropologist and her positioning in the field.

Livia Holden goes on to discuss such topics as what challenges doing research together with a husband brings and what possibilities it on the other hand also opens, or how she was perceived in the first period when she was childless and how the relationships changed and evolved when she came next time with a baby and how this changed situation opened up different arenas for her research. She reflects also on doing research in a village which was already previously studied by her professor J. L. Chambard and the negotiation of the relationships with the villagers on this subject. She reflects on her status as a woman who is concerned generally with mens matters, as she becomes a kind of honorary male, which allows her cross-gender behavior. She also discusses her ideas on authorship and the collaborative nature of her research.

Methodologically this book is also interesting as it combines different resources, even integrating the method of filming. The resulting ethnographic film from 2001 is called Runaway Wives and it was done in co-production with her husband Marius Holden who also wrote a chapter in this book (p. 60-8) that discusses and reflects the process of filming and the theoretical problems of visual anthropology.

This extensive self-reflection incorporated throughout the whole book makes it instructive and an interesting reading for every anthropology student and anthropologist. In addition the multidisciplinary approach to the research which draws from feminist and legal studies and social sciences will be of interest to any student or scholar of law, sociology and anthropology.

>> Information on the book by the publisher (Ashgate)

>> information on Tereza Kuldova (both anthropologist and artist)

Thesis: How Indian women fight the stigma of divorce

Unmarried Women in Arab Countries: Status No Longer Dependent upon the Husband

China: Where women rule the world and don’t marry

On African Island: Only women are allowed to propose marriage

This entry was posted by admin and filed under religion cosmology, culture traditions, Asia, books.