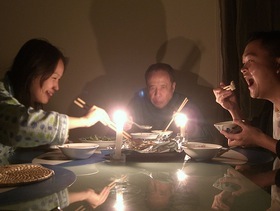 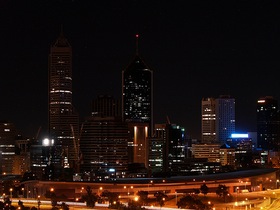 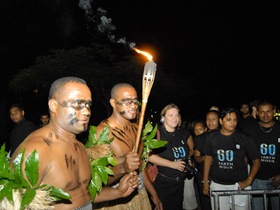 I have to confess I have an ambivalent relation to initiatives like the Earth Hour. But anthropologist Stephen Bede Scharper casts an interesting perspective on this new way to save our planet.

He describes Earth Hour as “the first globalized ritual", a `liminal space’ and therefore “a potent opportunity for change":

Earth Hour combines a spiritual quest, a moral mandate and a communal practice into a unique and truly global event. It can thus be considered a transcultural action of moral responsibility for the planet, a statement that “another world is possible.” It is not driven by brands, consumerism or corporate logos. Earth Hour is not Coca-Cola teaching “the world to sing in perfect harmony,” nor Nike telling us to “Just Do It.” It is, rather, approximately one billion people entering the threshold of a different relationship with both the planet and the cosmos.

(…)
Earth Hour has arisen, almost organically, outside of established religious and secular institutions. The fact that churches and municipal governments are now participating is a testament not only to its popularity, but also possibly to its motivational power and persistence, something that places the event in the category of “ritual.”

>> read the whole story in The Toronto Star

The Value of Rituals

World Cup Enthusiasm: “Need for a collective ritual, not nationalism”

This entry was posted by admin and filed under Us and Them, globalisation, ecology nature, cosmopolitanism.

In Paris I was interested to find out that the Eiffel Tower “joined” the last Earth Hour by turning all its trademark lights off during the set hour. While it would also be accurate to consider that it was rather the City Mayor PR team who did “join” the event, it was certainly an interesting fact and it turned the event into a more official observance.

Thanks for this info, Sarah. Many cities were participating officially. I suppose it has an extra effect when lights are switched off on such a landmark