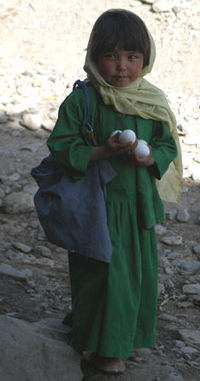 What impact has war on children? What has anthropology to say on this? This autumn I watched the movie “Buddha collapsed out of shame” by the Iranian film maker Hana Makhmalbaf. It tells the story of children who reproduce the violence of the adults. For me, it was the most impressive movie of the film festival Films from the South (Film fra Sør) in Oslo. Makhmalbaf won the Silver Mirror, Films from the South’s main award.

- This is no funny movie. I hope you’ll feel the pain and the suffering, said the 19 year old director before the screening in Oslo.

Five year old Baktay dreams of going to school. But her family is poor. When Baktay finally managed to sell the eggs of the family’s chicken and was able to buy a notebook, she gets attacked by boys who play war where they are the Taliban. The boys rip pages from her book, put a paper bag on her head, thread to stone her and to bury her alive. For girls aren’t allowed to go to school, and they must not show their hair.

In an interview on her own homepage, Hana Makhmalbaf says:

By showing today’s picture of Afghanistan, I tried to depict the effects of the recent years’ violence on the country. So that the adults could see how their behavior affects the younger generation.
(…)
First, it was the Russian communists, then the Taliban showed up, and now the Americans. One was communist, the other Muslim and the last one either atheist or Christian. But they all had one thing common, and that was “Violence”. And this violence has been injected over and over from three different groups into the culture of the people in this country so strongly that you can see it in their children’s play. 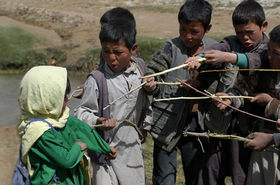 “Buddha collapsed out of shame” was reviewed (among others) by The Hollywood Reporter, The Guardian, The Epoch Times and Avuncular American. There are some video clips online as well

The movie reminded me of the thesis by anthropologist Elisabet Eikås about young people trying to rebuilt Afghanistan. Their activism is a continuous struggle with the structures of the society that they tend to reproduce.

In Children, War and Nation: Croatia 1991-4, anthropologist Maja Povrzanovic also writes about how children reproduce the adults’ behavior (in this case the Balkan war) in their daily life:

In winter 1991-2, my son Martin, who was two-and-a-half then, constantly built, ruined, rebuilt and ruined again his Duplo-buildings in a very aggressive way, claiming he was ‘playing Vukovar’. (…) In autumn 1993, in my son’s very first minute at kindergarten, a boy approached him with a toy airplane, making noise and boasting: ‘I am shooting the Serbs!’ On christmas Eve 1993, Martin wanted to decorate our Christmas tree with his toy guns (p84/85).

But it seems that children, violence and war is an underresearched topic.

“Descriptive work on children experience violence, in general, is better developed than theoretical frameworks are to explain the causes or consequences of such violence", Jill E. Korbin writes in her article “Children, Childhoods, and Violence” in the Annual Review of Anthropology 2003.

She notes that for a long time, children’s own voices and perspectives have been largely absent from the anthropological literature on childhood and violence.

Also in a more recent paper, anthropologist Jason Hart and Bex Tyrer remark that there is a lack of anthropological studies on children and war:

To date, the majority of research on children and war has come from the fields of medicine, psychiatry and psychology. This has included a heavy emphasis on “trauma” and pathology, with a more general body of literature exploring the individual’s physical, emotional and psychological nature of suffering.

Although these issues are obviously very significant, the wider societal dimensions of conflict – namely how war pervades institutions, political structures, culture, economy and communication systems – have been overlooked.

They quote Jo Boyden and Jo de Berry who write:

[War] does not just cause psychosocial and emotional harm, but also attacks the most fundamental conditions of sociality, endangering social allegiances and confidence, and drastically reducing social interaction and trust.

The researchers call for childrens’ participation in the research process:

The involvement of children directly in research activities represents an important move away from traditional approaches, according to which children are solely the objects of enquiry. A growing number of advocates now argue that children’s active participation in research is both a means to improve the quality and relevance of the data and make children themselves more visible within a particular community or within the broader society.

Such participation can also improve a child’s ability to communicate her/his views and acquire new knowledge. In this way participatory research can contribute to children’s empowerment.

Both Hart, Tyrer and Korbin stress that children do not only reproduce what they see and experience. They are not necessarily victims but they are active agents as well. Children’s involvement in political-military action (children as soldiers etc) are not solely the result of compulsion, coercion, and brainwashing. Hart and Tyrer write:

Few authors have shown willingness to consider the possibility that, in some situations, young people may engage with military groups as a reasoned strategy – as the most desirable option within the range of choices available. They may also enrol out of social and political concern.

Without denying the existence of trauma and without refuting the idea that the young may be victimised, we should learn more about the strategies children employ to deal with their adverse circumstances and maintain material, psychological, emotional and physical wellbeing.

While most literature that I’ve found is not accessibe for the public, their paper Research with Children Living in Situations of Armed Conflict: Concepts, Ethics & Methods is freely available. It is one of the Refugee Studies Centre Working Papers

Thesis: The limits of youth activism in Afghanistan

“We want children to be their own ethnographers”

Conflict Resolution and Anthropology: Why more scholarship on violence than on peace?

This entry was posted by admin and filed under Asia, persons and theories, youth, journal articles / papers.