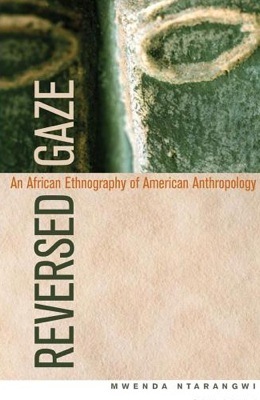 Why does anthropology tend to focus on “exotic others"? Why this obsession with Africa? How come calls by well-known anthropologists such as Paul Rabinow to “anthropologize the West seemed to have not brought forth much fruit? How racist is American anthropology?

Kenyan anthropologist Mwenda Ntarangwi discusses those and other questions in his new book Reversed Gaze. An African Ethnography of American Anthropology.

Yes, Ntarangwi has conducted an anthropological study of American anthropology! An important undertaking. He has studied textbooks, ethnographies, coursework, professional meetings, and feedback from colleagues and mentors. He “reverses the gaze", he stresses: Whereas Western anthropologists often study non-Western cultures, he studies “the Western culture of anthropology".

He is especially interested in “the cultural and racial biases that shape anthropological study in general".

In the preface and introduction he writes:

If anthropology truly begins at home as Malinowski states, how come, as I had thus far observed, anthropology tended to focus on the “exotic"? How come only a small percentage of fieldwork and scholarship by Western anthropologists focused on their own cultures, and when they did it was among individuals and communities on the peripheries, their own “exotics” such as those in extreme poverty, in gangs, ad others outside mainstream culture? (…)

This book is a personal journey into the heart of anthropology; representing my own pathways as an African student entering American higher education in the early 1990s that I knew very little about. It is a story about my initial entry into an American academic space very different from my own experience in Kenya, where we followed a British system of education.

It is also a story hemmed within a specific discourse and views about anthropology that can be best represented by remarks from fellow graduate students who wondered what i was doing in a “racist” discipline. (…) Troubled by this label, I consciously embarked on a journey to find more about the discipline.

He critiques dominant tenets of reflexivity, where issues of representation in his opinion are reduced to anthropologists’ writing style, methodological assumptions, and fieldwork locations. Inherent power differences that make it easier for anthropologists to study other people ("studying down") than to study themselves ("studying up") are rendered invisible.

Ntarangwi seeks to contribute to the process of “liberating the discipline from the constraints of its colonial legacy and post- or neocolonial predicament". As long as the bulk of anthropological scholarship comes from Europe and North America and focuses on studying other cultures than their own, the power differentials attendant in anthropology today will endure.

I have just starting to read and took among others a short look at the chapter about the annual meetings of the American Anthropological Association (AAA).

“I believe it is at the AAA meetings that the anthropological ritual of what we do as anthropologists is best performed", he writes:

Just as America has become an economic and political empire, American anthropology has consolidated a lot of power and in the process has peripheralized other anthropologies, forcing them either to respond to its whims and hegemony or to lose their international presence and appeal. The American Anthropological Association (AAA), I argue, is an important cultural phenomenon that begs for an ethnographic analysis.

It was in 2002, four years after his graduation that Mwenda Ntarangwi attended his first AAA-meeting. It was held in New Orleans. Already at the airport, he realises it is easy to spot anthropologists:

They were dressed casually, many were reading papers, and majority wore some exotic piece of jewelry or clothing that symbolized their field site - either a bracelet from Mexico (…), a necklace from a community in Africa, a tie-dyed shirt, or a multicolored scarf.

His observations from the different sessions he attended remind me of my own impressions: “Conference papers were written to make the presenters sound more profound rather than to communicate ideas", he writes.

But there were interesting panels as well, among others about “marginalization and exclusion of certain scholars and scholarship on the basis of their race". There were, he writes, “discussions of how Haitian anthropologists challenged the notion of race but were never “knighted", as was Franz Boas, simply because they were Black".

He also attended sessions where the speakers were using data collected ten or twenty years before and yet were speaking of the locals as if representing contemporary practices.

Ntarangwi went to the 2007 annual meeting as well. He was very much interested in seeing how well the meeting itself reflected in its theme “Inclusion, Collaboration, and Engagement.”

I’ll write about it next time. I’ll take the book with me on my short trip to Portugal. I’m leaving tomorrow.

The Five Major Challenges for Anthropology

The resurgence of African anthropology

“Take care of the different national traditions of anthropology”

This entry was posted by admin and filed under culture traditions, Us and Them, books, Northern America, anthropology (general), University / Academia.

Thanks for posting this Lorenz. This is much needed work. Ntarangwi could have also done the unconventional thing of sharing his ideas with a wider audience, rather than restricting it to print, where only a few will ever read it. I do very much like what he is saying, as you report it, it is long overdue. From my perspective, the only reason I could think of joining the herd on its annual pilgrimage to the AAA (I have never been to their conferences in person), would be to scrutinize the events as he has. One needs to also scrutinize those who depart from the periphery each year to go massage the ego of the monster. Now a group of Americans is debating whether anthropology is a “science"…irrelevant to where I am, but they speak as if their anthropology was the universal one (and that makes the debate more relevant). When the AAA teams up with other North American anthropology associations, as it has done in Mexico and Canada, they gather as if their discussion of matters concerning American anthropology held equal weight and the same meaning for everyone else, which they do not in many cases, and the result is that they tend to bore and annoy some of their non-US colleagues (though, I am sure, they were careful not to reveal their true sentiments, being the good academicians that they are).

Forte
These are very good comments and suggestions but alas as part of the larger machine of publishing and control the book is only available in print. I echo your sentiments on how self-absorbing some American anthropologists can be and the assumption that theirs is the only anthropology worthy of thinking about. I try to analyze some of the issues of collaborating with other anthropology associations in my book and might be interesting to hear your thoughts once you get to read it.

This book in also on my reading list! As you said, it’s well overdue - in fact I think I have wished for such a book to appear since in my introduction to the discipline (ie. student days)… The critical perspective seems engaging, and I also look forward to learning more about Kenyan scholarship at the same time. The preface is certainly exciting.

Thank you for posting, I look forward to your impressions once you’ve read it.

I don’t know if it’s an issue of studying “up” or studying “down.” I haven’t read his book, but certainly those who are not from the mainstream dominant cultural background of the majority in the discipline here in the USA can tell you that our experiences among “others” and anthropological analyses in our research might differ vastly just from the fact we are not from here. Certainly in my case, I was not perceived in the same way as an American of any skincolor, etc. would be when I are in the field. In addition, what might appear “exotic” to some of our colleagues was actually more familiar to some of us than a predominantly white academic environment in the Midwest.

Rather than only looking at anthropology as inherently something or another, people can consider that American-based anthropology does not have some special immunity from the same racism, ethnocentrism, and hierarchies that pervade here.

It seems that some of this is an attempt to appeal to the resurrection of what has been called “halfie” anthropology, but perhaps on better terms than being reduced to apologizing for having some advantages. It might work for some and it might work as a means of taking the discipline in areas that it needs to go in order to fulfill what it makes claims to but for some of us the need to leave the USA is stronger than the desire to “fix” anthropology.

There’s nothing “important” or “needed” about this work. It totally misses the mark.

He might aswell asked why Americans don’t live in Sweden. The question totally misses the mark.