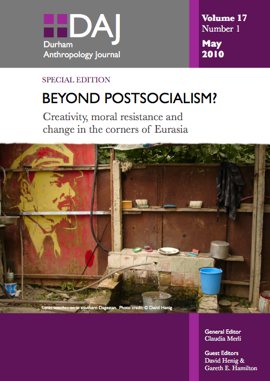 “Beyond postsocialism? Creativity, moral resistance and change in the corners of Eurasia” is the title of the new issue of Durham Anthropology Journal.

The authors want to give us alternative views on so called postsocialist societies.

Postsocialist studies, David Henig explains in his editorial, have been dominated by Western perspectives (the East as the “Other") and also by discourses of capitalist “triumphalism” (from socialism or dictatorship to liberal democracy, from plan to market economy).

The reality is different. Anthropologists have found important continuities between socialist and post-socialist eras.

Míriam Torrens has been on fieldwork in rural Romania. Instead of postsocialism or new capitalism", she writes, “what we find in these communities is the prevailing picture of a traditional peasanthood with some ‘innovations’":

(B)oth socialist and liberal economists (…) have failed in taking into account the strength – and the reasons for this strength – of social institutions such as the family and the community, their customary law and the broad impact of communal and cooperative action.

>> download / overview over all articles in the new issue

This entry was posted by admin and filed under culture traditions, Europe, journal articles / papers.