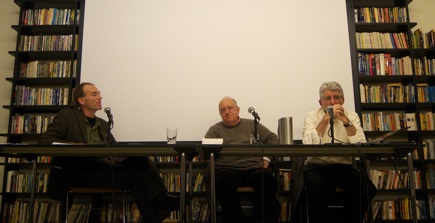 Anthropologists, sociologists, philosophers, economists and activists have come together and written a citizen guide for a human economy.

In The Human Economy more than 30 authors from 15 countries show alternatives to our current dominating economic system. 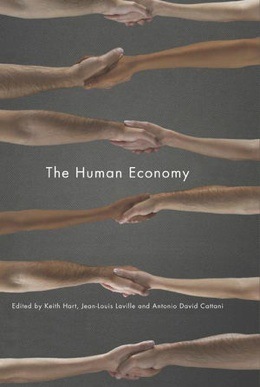 The table of contents looks promising: There are essays on for example solidarity economy, community participation, fair trade, ecological and feminist economics, alter-globalisation, social entrepreneurship and also articles on two topics that are especially relevant when we’re sitting in front of the screen: gift economies and digital commons.

I like the authors’ approach. They are not dreaming of an obscure and distant revolution. We don’t need a revolution. The alternatives do already exist, explained Keith Hart in Oslo:

The problem with posting an radical alternative to the socalled capitalist economy is that it raises question how do you get there from where we are.

What I want to argue is that the economies are much more plural than ideologies or conventional theories make them out to be. We live in a world in which we say if we can identify the economy as capitalist we’ve somehow done the job. Or if we want to build another one and call it socialist we’ve done the job.

My notion is that we live by a large numbers of economic principles which includes family economy, the importance of the state as an agent to redistribution, voluntary associations, NGOs etc

Keith Hart made me think of what I wrote nearly ten years ago when I prepared my final exam in economic anthropology. The more I read about Kula, Potlatch and other gift economies in distant places, I wrote (in German only), the more I got convinced of that we are operating in a similar way, that capitalisms’ importance is overrated. I found lots of examples of local exchange trading systems, even in my neighborhood, that work without any money involved: You repair my bike, and I’ll help your with your English homework.

The internet is a huge gift economy. Wikipedia, Flickr, blogging, we’re giving away our work for free. Or think of the free software movement or the way science works. Capitalism dominates only a small part of our economic system.

The authors are optimistic. It’s more easier than ever to realise a Human Economy. In the introduction (pdf), editors Keith Hart, Jean-Louis Laville and Antonio David Cattani write:

This world is massively unequal and voices for human unity are often drowned. But now at last we have means of communication adequate to expressing universal ideas. Anthropologists and sociologists have shown that Homo economicus – the idea of an economy based on narrow self- interest, typified as the practice of buying cheap and selling dear – is absent from many societies and does not even reflect what is best about ourselves. We ought to be able to do better than that by now. But ideas alone are insufficient. Emergent world society is the new human universal – not an idea, but the fact of our shared occupation of the planet crying out for new principles of association.
(…)
The Human Economy is a work of reference that has come out of a dialogue between successful social experiments in many parts of the world and theoretical reflection on them. The resulting synthesis is an invitation to advance knowledge along the lines we have begun and to dare to build a better world.

Unfortunately, this “citizen guide” exists on paper only. I asked Keith Hart if a webversion is in the making. His answer was No. Lack of time. “I’m totally overworked", he said.

I’ll try to write more about the book in the coming weeks.

>> short presentation of the book on Keith Hart’s blog’

>> After the Crash : A Human Economy for the 21st Century (published in Revue du MAUSS permanente)

>> read Keith Hart’s book “The Memory Bank. Money in an Unequal World” and his blog

How anthropologists should react to the financial crisis

What anthropologists can do about the decline in world food supply

Why were they doing this work just to give it away for free? Thesis on Ubuntu Linux hackers