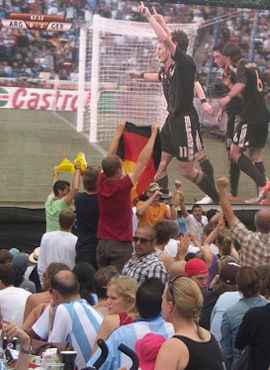 Oslo, Saturday afternoon. Several thousands people are watching Germany-Argentina on the big screen. The man opposite to me is wearing the German jersey. He is not German, but Norwegian. He is not the only one who identified with the"others” during the World Cup. Not only teams from the rich “West” are popular. A few days ago, people from all nationalities cheered on Ghana. Norwegian TV2 interviewed fans of the Ivory Coast team in South Africa. Ivory Coast fans came from all over the world, and many of them were neither black nor from the Ivory Coast.

The Football World Cup is often associated with primitive nationalism. Watching the matches in different public viewing places made me wonder: What about seeing the event as an arena of everyday cosmopolitanism, where people engage with the world, identify with teams, people and nations from far away places?

Even German fans of the German team cheer on players with names like Mesut Özil and Sami Khedira. In the German team, 11 of the 23 players were eligible to play for a different country. What effect does this have on notions of Germanness and identifications in general?

Mesut Özil and his fans in a beer garden in Stuttgart, Germany.

But a quick google search revealed that the cosmopolitan aspects of the football world cup do not seem to be a popular research topic. I haven’t found papers that address this topic explicitly - but maybe a closer look at the 90 journal articles that Routledge Journals made free to access until the end of July will nuance the picture?

Or maybe rather not?

“Academic treatments of football have tended to focus either on the game’s capacity to inspire xenophobic hooliganism amongst its followers or how it has been exploited by politicians for nationalistic purposes", writes Peter Hough in one of them called “Make Goals Not War“. There he highlights the mostly ignored positive contributions of international football to international relations. But he is not addressing cosmopolitanism either.

“Despite the apparent existence of transnational football fandom there seems to be a reluctance in academe to view this as generative of new identities contesting more traditional ones related to the nation as a privileged frame for structuring and reproducing identities", he writes in the paper Transglobal Scandinavian? Globalization and the contestation of identities in football that is not freely accessible (mostly about club football, though).

Why is this so?

“The lack of understanding of the popular and cultural appeal of sport seems to me linked to the incomprehension about and instinctive dislike of patriotism", argues Sunder Katwala. In a comment to The football world cup is not xenophobic by Robert Sharp, he criticizes the view “that we will (only) have a better world when people do not identity with national identities, but instead only with the brother-and-sisterhood of humanity.” Instead, cosmopolitanism can in his opinion be achieved “through supporting positive and outward-looking national identities which see the value as internationalism as important to “who we are”.

Maybe the World Cup constitutes such an arena for creating these identities?

There is also a comprehensive overview at GlobalVoices

Or take a look at Steps to an ecology of transnational sports by Thomas Hylland Eriksen and Ambivalent Football. An Ethnographic Approach to Postcolonial Player Migration by Kristian Dyrkorn

World Cup Enthusiasm: “Need for a collective ritual, not nationalism”

Is the Football World Cup a peacemaker?

World Cup: Cultural representations and why patriotism is not healthy

Interview with Benedict Anderson: Being a cosmopolitan without needing to travel

This entry was posted by admin and filed under Us and Them, cosmopolitanism, sports.