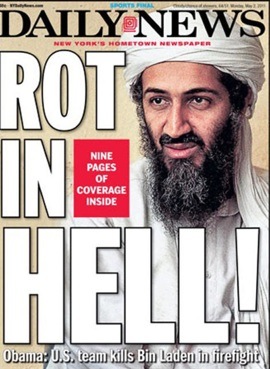 (draft, post in progress) It’s not the first time that Osama Bin Laden has died. Nevertheless, the Western political leaders, even European leaders who were supposed to oppose death penalty, are celebrating the killing of Bin Laden (incl. CIA torture), and the frontpages of American newspapers are shouting in Wild West style “ROT IN HELL", as Daniel Martin Varisco documents on the blog tabsir.

Varisco is one of several anthropologists who have already started commenting this issue.

William O. Beeman, chair of the department of anthropology, University of Minnesota and past president of the Middle East Section of the American Anthropological Association, explains in an article the myths surrounding Osama bin Laden.

One of the myths is bin Laden’s supposed importance. “Osama bin Laden at the end was far from the looming powerful figure he was made out to be", he writes:

bin Laden was promoted by the Bush administration as the mastermind of a gigantic apocalyptic global organization under his control. (…). This was a gigantic exaggeration that was largely accepted by the American public without question.

In fact, bin Laden was an incredibly useful symbolic bogeyman. His mere existence justified the United States’ presence in Afghanistan, as well as billions of dollars spent supporting the Pakistan military regime without complaint from the American public.

Furthermore, bin Laden was seen as promulgating the United States as al-Qaeda’s principal target. That’s not so true either.

“The mythic ideology of Islamic confrontation with the West, inherent in the bin Laden myth, should die with him", he writes:

Americans, rather than celebrating a triumph over Islam, should instead be looking forward to a new era of cooperation with the progressive peoples throughout the region, who, with bin Laden’s death, have now begun to have the false accusation of Islamic extremism lifted from their shoulders.

W. Porter Bourie, a PhD student of cultural anthropology at the University of Colorado at Boulder, comments on his blog Dynamic Relations:

Celebrating his death only redefines the Us-Them divide and misdirects our gaze from the conditions that have led to the state of the world. His death won’t cause more violence, but the West’s continued political economic imperialism will. (…) Celebration blinds us to empathy and deludes us into thinking that the world is easily knowable.

Anthropologist Jason Antrosio, presents on the blog Living Anthropologically insights from anthropology and its “voice for tolerance", contrasting it to the us-versus-them mentalities of the American “war on terror". It would have been much a more powerful and enduring victory to see bin Laden tried in a court of law, he argues. “Let’s celebrate by investing in jobs, an inclusive healthcare system, schools, and paying our teachers", he concludes.

The History News Network has published an interview with anthropologist and Afghanistan expert Thomas Barfield on Bin Laden’s death. Barfield seems to identify with the official American rhetoric, and when he says “We", he means the U.S. administration.

Hamid Mir was the last journalist to interview Osama after 9/11. In his article The Osama bin Laden I knew, published today in the Pakistani newspaper The News, he concludes:

Both Osama bin Laden and Americans violated the sovereignty of Pakistan. It must be stopped now. Osama is dead. If America does not leave Afghanistan after the death of Osama bin Laden, then this war will not end soon and the world will remain an unsafe place.

Interesting analysis by Matt Thompson at Savage Minds: “One of the most revealing bits of trivia has been that Bin Laden was assigned the code name “Geronimo” by the operation tasked with capturing and killing him", he writes:

This raises the question, what does a nineteenth century Apache leader have to do with twenty first century Saudi millionaire? Perhaps nothing when viewed from an academic standpoint, it seems more like a non sequitur. But when read as expression of an underlying ideology, one that has legitimated American military action for centuries, the answer is: quite a lot, actually.

Yes, and then we’re back we I’ve started this post, actually, in the Wild West! (Check also Osama, Geronimo, and the scalp of our enemy by Aaron Bady at zunguzungo)

How can anthropology help us understand Swat and Taliban?

Selected quotes from “On Suicide Bombing” by Talal Asad

Fieldwork reveals: Bush administration is lying about the “war on terror” in the Sahara

Anthropology and CIA: “We need more awareness of the political nature and uses of our work”

War in Iraq: Why are anthropologists so silent?

Thesis: That’s why they go to war

This entry was posted by admin and filed under politics, Us and Them, Northern America.

Justice? American Justice, this would be!For goodness sake could Osama Bin Laden be extradited? Perhaps the proposal was made? Was it made? Otherwise we should begin to consider another order: American civilised people or barbarians of a future time.When a fighter is murdered by a “very civilised” country!

How the major daily newspapers all printed this garbage story without any real evidence or eyewitness interviews indicates the abject failure of an independent press. Notice how quickly this story faded away without follow-up. He never was wanted for any crimes and yet people refuse to process facts.
Hidden from all this is the fact that Israel is the biggest sponsor of state terrorism in the world! A little research and reading of Israeli newspapers, especially Haaretz, confirms the problems citizens of Israel have with their fascist leaders and how their safety is jeopardized
by their own government. Even this column fails to reveal this Bin Laden story as pure propaganda and lies. Anthropologists know better yet they often are more interested in furthering their careers rather than expose the lies.

Fact: Bin Laden died in December 2001 as reported by local and a few western media outlets. Someone on dialysis cannot survive in a compound for years on end without drawing attention. And none of you mention all the phony Israeli produced videos of Al-Qaida terrorists that were never vigorously refuted. Anthropology thus has sunk to another low level like many other disciplines that perpetuate garbage journalism to maintain funding.Bin Laden had to be kept alive as the entire phony war on terror hinged on it. What is left is the degradation of the most important biblical sites in the world because anthropologists kept their mouths shut.
My own anthropology training finds the comments on this page pathetic and lacking conviction.