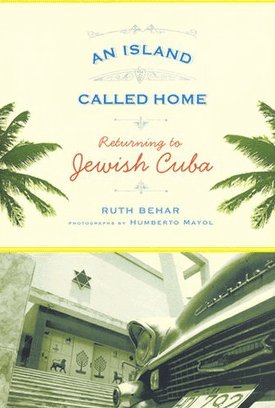 The Ann Arbor News (Michigan) interviews anthropologist Ruth Behar who has written a new book about Jewish life in Cuba. The island’s tiny Jewish community is among the most diverse in the world.

“An Island Called Home: Returning to Jewish Cuba” offers not only profiles of Jews who live in Cuba, but details the author’s own history - wherein she, at age 5, left Cuba with her family at the time of the 1959 revolution.

She tells she was surprised about how Cuban Jews try to preserve the past. A lot of young people are willing to emigrate to Israel. Many times in the book, people mention the absence of anti-Semitism in Cuba. The anthropologists explains, people in Cuba / in the Caribbean are more tolerant:

Definitely it is helpful to Jews if they live in a culture that’s more secular than in a culture that’s heavily Catholic and Christian - especially if that culture continues to say the Jews killed Christ. This kind of thing does not exactly create good feeling toward the Jews. …

But we can’t give full credit to the revolution for this, because even before ‘59, Jews did not experience anti-Semitism, based on the stories that I heard from my family, my Polish grandmother. When she arrived, she said it was such a breath of fresh air from Poland that she just - people didn’t have the anti-Jewish stereotypes that they did in Poland and elsewhere in Europe.

So it was like a fresh slate. That was part of it, and I think the Caribbean is different, too, in that the African influence on Cuba is very important. The African religions are much more open and tolerant of difference.

According to the Miami Herald, the book is “a narrative that tugs at the heart": It’s a collection of anecdotes and observations accompanied by black and white images shot by Cuba-based photographer Humberto Mayol:

In many respects, this may be Behar’s most personal work. The University of Michigan anthropology professor has written poems and essays about the nostalgia, grief and displacement of exile. She was also awarded a MacArthur Foundation ‘’genius'’ grant 18 years ago and even has a short feature film about Cuban Sephardic Jews, Adio Kerida, to her credit. But here she lovingly intertwines her own thoughts and feelings with the more analytical observations of her profession. The result: a narrative that tugs at the heart.

>> continue reading in the Miami Herald

>> Excerpts from An Island Called Home by Ruth Behar

On her own website, she describes herself as a “cultural anthropologist who specializes in homesickness":

I’m a memoirist who suffered from amnesia as a child after leaving Cuba. That must be why I’m obsessed with remembering and all the ways that history leaves traces on how we live in the present.

She has also started writing a web diary (a web1.0 blog)

This entry was posted by admin and filed under indigenous people / minorities, religion cosmology, culture traditions, Us and Them, books, Caribbean.

My father and his parents were German Jewish refugees in Cuba during World War II. Though I was born in the U.S., this Cuban background got me interested in Cuba over fifty years ago. Today I operate a wideranging and easy to used Yahoo news group focusing on Cuba. I spend long periods of time living and working here in Cuba to help interested English-speakers everywhere learn some more about Cuban society. It is an endlessly fascinating place. Some things work, some don’t, but there’s much we can learn from Cuba, if we would only open our hears, our minds, and at long last normalize relations with this island, the little engine that could.