With mobile banking taking off around much of the developing world, how long will it be before international aid is delivered electronically, asks anthropologist Ken Banks in PC World.

Banks is the founder of kiwanja, an organisation, that helps non-profit organisations to make better use of information and communications technology in their work - of course with an anthropological perspective. “Anthropology is interestingly the area which raises the most eyebrows among delegates at conferences", he writes on his website. 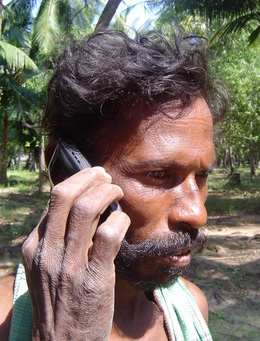 As our ever-expanding digital world slowly reaches some of the poorest and marginalized members of society, opportunities to deliver financial aid to them electronically becomes less myth and more reality.

Mobile phone users in a growing number of developing countries can already pay for goods and services wirelessly through their mobile phones, and there are few technical challenges in allowing someone in the U.K., for example, to make a direct donation to a user in Kenya by way of airtime credit to their phone.

Just as the Internet redefined the way we shop, the mobile phone will likely end up doing the same for international aid.

There’s a lot to explore on Kiwanja’s website and elsewhere on the web . Some weeks ago he wrote the article Anthropology’s Technology-driven Renaissance (PC World), Africa’s grassroots mobile revolution – a traveller’s perspective (Vodafone Retriever). And his projects were presented by the BBC (Mobile development rings true), Global Voices (Zimbabwe: Using New Technologies to Fight for Democracy) and Mongabay.com (Cell phones, text-messaging revolutionalize conservation approaches - An interview with IT conservation expert Ken Banks)

Some of you might remember an related article in the New York Times by ethnographer Jan Chipchase Can the Cellphone Help End Global Poverty?.

Why the head of IT should be an anthropologist

Ethnographic reports about the uses of ICT in low-income communities

This entry was posted by admin and filed under technology, development empowerment, applied anthropology.