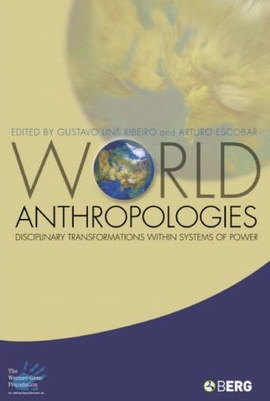 What is the state of anthropology at African universities? African anthropology is interdisciplinary and focuses on solving problems like poverty, diseases and violence, Paul Nchoji Nkwi writes in the book World Anthropologies (download the book):

The West invented anthropology to study the “Other” and it defined the canons. But in developing economies, where resources are scarce, science has to be either useful or be gone.

The European and American traditions of the discipline are distinct and the discipline surely deserves an African twist as well. It is time for the social sciences, including anthropology, across Africa to regroup and to face the challenges that confront us as a continent and as part of the human family: Disease, hunger, HIV/AIDS, ethnic wars, poverty … We need to look for answers to these scourges. It will be salutary for Africans to bring their own particular perspectives to all the social sciences, including anthropology


It is the applied option that dominates anthropology in Africa. Applied anthropology as the focus of academic work rehabilitated the discipline that has been discredited in post-colonial Africa because of its history as the handmaiden of colonialism:

African anthropologists grew up in societies that were either colonized or recently decolonized. Westerners initially controlled the production of anthropological knowledge and the result was functionalist studies. These studies were explicitly ahistorical and often myopic about colonialism. After the colonial period, the new nations of Africa dismissed anthropology both as a cultivation of primitivism and as an apologetic for colonialism.

But by the 1980s, there was more and more demand for anthropological knowledge - mainly regarding development projects. Many projects had failed due to their top-down approach. A perspective from below was needed - an anthropological perspective. Also, a shift from hospital-centered to people-centered health care gave medical anthropologists a window of opportunity.

In 1987, the Pan African Anthropological Association (PAAA) was established. This was another event in the late 1980s and early 1990s that helped integrate anthropology into the discourse of development in Africa.

Anthropology, Paul Nchoji Nkwi writes, had to rediscover itself as a discipline that could help to solve problems:

During the first PAAA conference in 1989, many participants argued that addressing important human issues, such as the need for health care, the spread of famine, rapid population growth, environmental degradation, discrimination and violence against women, poverty, and ethnic violence would enhance the discipline’s tarnished image.
(…)
Since 1989, the PAAA has organized twelve annual conferences and a series of training workshops for junior anthropologists. The association has also worked hard to bring the discipline closer to other social sciences. The future of anthropology depends, we feel, on how well the discipline integrates with the other social sciences. For anthropology to attract funds it must take on, and bring a unique perspective to, research problems that are common to other social sciences.
(…)
Over the years, African anthropologists have worked closely with environmental biologists, organic chemists, economists, demographers, health providers, and others. This experience showed that multi-disciplinary work is mutually enriching since each discipline draws on its unique insights to attain a common goal.

At the University of Yaoundé, there were 525 students majoring in anthropology in the 2002-2003 academic year, the same number of students took it as their minor. Paul Nchoji Nkwi witnessed an “increased involvement of the social sciences in health, agriculture, animal, environmental, and population research programs funded by the government":

Targeting critical areas such as general health, reproductive health, population growth, the environment, and agricultural development led to the design of courses in medical anthropology, development anthropology, and environmental impact assessment. Today, the University of Yaoundé-I has one of the most active and dynamic departments of anthropology in Central Africa, attracting students from the entire region.

African anthropologists want opportunities to work and earn their way - in partnership with their colleagues all over the world, he stresses:

To bring this about requires a series of small but doable changes in the formal academic training programs, grant administration procedures, and grant requirements to promote better partnership arrangements.
(…)
Strengthening the ability of Africans to organize and develop their own professional associations is a way to address all of these issues at once. Truly professional associations will link Northern and African anthropologists in a single intellectual, publishing, and teaching endeavor on a more equal footing.

SOME LINKS RELATED TO AFRICAN ANTHROPOLOGY:

JENdA: A Journal of Culture and African Women Studies

Book and papers online: Working towards a global community of anthropologists

This post raises several very interesting issues and questions – and thanks of course for finding these resources online and for posting this great synopsis.

One of the issues has to do with relevance, to be, as stated above, “either useful, or gone.” I would not disagree with the value of what African anthropologists have done as stated above.

However, I do recognize a tendency that I also encountered in the Caribbean, and it can be a nasty one: to use scarcity (many African countries simply do not have scarce natural resources, so here we need to question how scarcity is manufactured) as a means of silencing critical thinking and, of course, dissidents. The tendency then is for some local scholars to mute other local scholars whose work is too critical, not policy-oriented, not on board with the development team. These debates are had locally, and fought out locally, but the speaker seems to be projecting a picture of unanimity that I think is not too credible (unless a massive and bloody purge has happened). As I said, some of these nations have vast natural wealth, and it’s not scarcity, but how regimes work in tandem with an international system to keep poverty local, and to export wealth to the top and to foreign interests. This kind of problematic is absent in the discussion above.

Research that questions cultural practice, power, ways of doing politics, etc., will not put a roof on a house, will not fix teeth or remove a diseased appendix – but it can be part of a movement that targets something that is also a terrible challenge to people’s health and wellbeing: the oppressive state. It would be interesting to hear from Ugandan anthropologists who worked under Idi Amin, given that Makerere University has one of the continent’s oldest anthropology departments and the university did not escape the violent repression.

In other words, and for reasons one can understand without engaging in personal vilification, some of the representations offered above are conservative and careful. Aside from all of this, it would be great to hear from some of our African colleagues online.

Thanks for your interesting comment (and the extended version on your blog Useful Anthropology (and “Political Gonorrhoea”). I’m not sure how “conservative” his positions are. Maybe I also should have included this “anti-government"-paragraph by Paul Nchoji Nkwi:

While anthropologists must continue to produce knowledge as their primary objective, they cannot remain indifferent to the problems faced by local communities every day.

How many anthropologists confront their governments for failing to improve the quality of life of the people?

How many produce ethnographies as their Ph.D. theses, obtain their degrees, and promote their careers, while remaining indifferent to the plight of people whom they studied?

What use is anthropology if we do not listen to the people and assist them in finding lasting solutions to their daily problems? Anthropology must and can find ways to survive as a useful discipline without sacrificing scholarship.

You’re right about this, and I only vaguely recalled this side to his piece since I read it some time ago. I think this is about as anti-government as he will get. Incidentally, I am not blaming him personally; he is walking a tightrope and trying to satisfy a lot of competing interests and pressures in as moderate and pragmatic way as possible.

How many anthropologists confront their governments for failing to improve the quality of life of the people? What a question? A proopsal for an anthropology for action? We thought that our discipline would enable us to attain the principles of functioning which underlies social forms and perhaps indicate schemes or packages of initiatives that would yield results. We wonder that his would be through an anthropology for action.