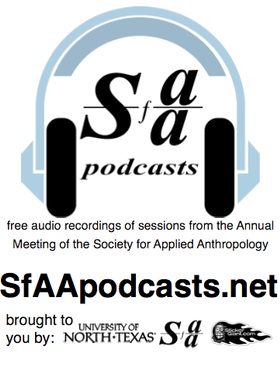 Their first set of conference podcasts in 2007 was a huge success. Now, Jen Cardew and her team published a large number of new recordings from the 2009 conference of the Society of Applied Anthropology.

It seems to have a been an interesting conference. There are podcasts about the following topics:

The Engaged University: What Does it Mean for Applied Anthropology?

Different Fields, Common Challenge: Lessons For and From Military Anthropology

Study of HIV and STIs in the Western Hemisphere, Part I

Studies Of HIV and STIs In The Western Hemisphere, Part II

This entry was posted by admin and filed under Open Access Anthropology and Knowledge Sharing, applied anthropology, anthropology (general).

I cant help but wonder if most of the speakers of the “military” panel really understand the concerns and criticism of the AAA’s ethics board and the Network of Concerned Anthropologists (amongst other critics of HTS and HTT). Even if they do, they seem to twist and turn the arguments out of context. Marietta Baba’s attempt to reduce the decision for a change of the AAA’s code of ethics to mere “politics” and thus trying to make them seem unprofessional is, in my view, not just simplistic - shes merely missed the point. I also can’t stop wondering about Riall Nolan’s last words - did he ever try to understand the motivation of HTS’s opponents or is his naive obsession with “national security” really that extreme?:

“Many of us even today are still debating weather or not to get involved with the world rather to learning about how to do it well. Worse yet some of us have decided not to, and they want to keep the rest of us from engaging, too. Well, as Charlton Heston might have said: “Over my cold dead body.” “

…Nolan’s implications are sadly misleading, but his disgusting Heston-esque quote (who would only have his rifle taken away from him “from my cold dead hands"), seems poorly fitting, esp. in the context of a panel on “Lessons For and From Military Anthropology".

Thanks for your comment, Ben. I’ve just started listening, it seems it was a quite biased panel?

Hi,
Ive just seen that there are more interesting podcasts concerning the topic of anthropology& military:
“Scholars, Security and Citizenship, Part I & II (SAR Plenary)", including speakers
Laura McNamara, David Price, Maren Tomforde (German Armed Forces & Command Coll-Hamburg) and many others.
I havent found the time to listen to all of the lectures yet, but the diversity of lectures and speakers seems more promising than the “Different Fields, common Challenge"-workshop.