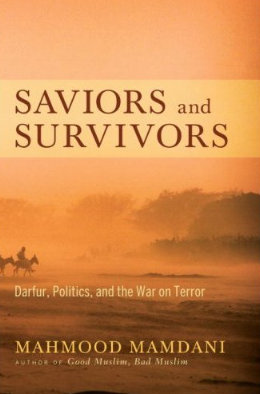 300 000 people have been killed and 2.5 million been made refugees in the war in Darfur. In his new book, anthropologist Mahmood Mamdani describes the Save Darfur campaign as representing a refracted version of the moral logic of the “War on Terror” with the Arabs in both cases branded as evil, Alex de Waal writes in The Monthly Review.

The Save Darfur lobby demands, above all else, justice, the right of the international community — really the big powers in the Security Council — to punish “failed” or “rogue” states, even if it be at the cost of more bloodshed and a diminished possibility of reconciliation. More than anything else, “the responsibility to protect” is a right to punish without being held accountable — a clarion call for the recolonization of “failed” states in Africa. In its present form, the call for justice is really a slogan that masks a big power agenda to recolonize Africa.

Mamdani criticizes Save Darfur as mobilizing “child soldiers,” by which he means naive American students, in a campaign that diminishes Africans as part of an argument to “save” them, G. Pascal Zachary notes in his review.

Zachary is one of several scholars who discuss Mamdanis book Saviors and Survivors. Darfur, Politics, and the War on Terror on their group blog Making Sense of Darfur.

Zachary is a huge fan of Mamdani but feels that “like almost everyone else who speaks on Darfur, Mamdani too has another agenda":

Like all those he complains about who use Darfur to score points on matters of greater importance to them – repressive Islamic regimes, Christian tolerance, the value of military intervention, etc – Mamdani too subordinates Darfur to a broader set of stories he wants to tell about dysfunctional American power in the world, about misunderstood Muslims, about an Africa violated by Westerners from every point of the political spectrum. Mamdani may be right about all of these larger stories, but just he is wrong to exploit Darfur – as wrong as those he finds guilty of doing the same.

>> read the whole text “Mamdani and the Uses of Darfur”

>> The Darfur the West Isn’t Recognizing as It Moralizes About the Region (New York Times, 30.3.09)

In an interview with the Boston Globe, the anthropologist explains his interest for the Darfur case:

In a context where African tragedies seem never to be noticed, I wondered why Darfur was an obsession with the global media. The reason, I realized, was that Darfur had become a domestic issue here, thanks to the Save Darfur movement. So I thought it important to examine the movement’s history, organization, and message.

I’m struck by the contrast between the mobilization around Darfur and the lack of mobilization around Iraq. The explanation, I believe, lies in the fact that Save Darfur presented the conflict as a tragedy, stripped of politics and context. There were simply “African” victims and “Arab” perpetrators motivated by race-intoxicated hatred. Unlike Iraq, about which Americans felt guilty or impotent, Darfur presented an opportunity to feel good.

This entry was posted by admin and filed under politics, Us and Them, Africa, books.

I thought that this was a great piece by Mamdani as well:

Thanks for posting this.

Are we not getting to the point where we are afraid to say anything about anything for fear of being accused of representational exploitation?

This is a narrow and very liberal view. It is based on the assumption that intervention, force and over-determination of a situation are the only forms of violence and oppression.

But indifference, disarticulation, under-determination and disengagement can also be forms of oppression, leaving people to their own devices is not always that best way.

Just because Anglo-Saxon polities were founded on liberal notions of negative freedom, and just because writers like Foucault took this negative sense of freedom and translated it into the representational and discursive realm (though even he turned back, realising we could not be “free” of discourse as it is constitutive of what we become as people) does not mean that hand-wringing and caution to this extent is necessarily ever going to help anybody.

Yes, the discussion on the Darfur-blog is continuing: Patience Kabamba makes a similar point as you, Daniel: “Mamdani’s argument does seem to overlook the daily suffering of Darfurians“, while Alex de Waal explains the connections with Save Darfur and the “War on the Terror”