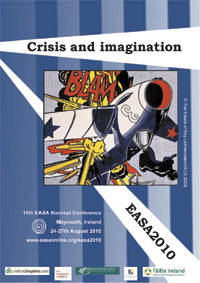 A bit more than two weeks ago, around 1300 anthropologists from all over Europe left the university village Maynooth not far away from Dublin. Europe’s largest anthropology conference, the biennial congress of The European Association of Social Anthropologists (EASA) was over.

As usual, hardly any information about the knowledge that was exchanged at the conference, found its way to the public.

Here is what I found.

Eoin O’Mahony, geographer at Maynooth, sums up the opening keynote lecture by one of the most famous anthropologists around - Talal Asad.

“As far as I can tell", he writes, “the lecture laid out the ground for a new anthropology of terrorism and human rights". Talal Asad “mapped out the economy of liberal human rights where the reorientation of the concept of ‘just war’ made certain peoples’ deaths necessary to safeguard the lives of others".

Asad’s paper, which his speech is based on, is available online (pdf - download it before they remove it!). Or check also an earlier post Selected quotes from “On Suicide Bombing” by Talal Asad.

Philipp Budka  (University of Vienna) is the only one who has written a report about the conference. It focuses on workshops that deal with media (technology). Several bloggers are among the paper givers, for example John Postill, Alexander Knorr and Gabriella Coleman (who blogged a little bit about her Ireland trip).

Stéphane Voell, blogger at Traditional Law in Georgia, is wondering if it was worth organizing a workshop after not more that seven or eight people showed up. It reminded him on the days when he as a 17 year old was playing in his school band (Text in German only).

Finally, Cicilie Fagerlid explains us why she is calling conferences for festivals:

The more anthropology (or other academic genres) I engage in during a 3-4 days period, the more engaging it gets. Listening to debates and commenting on papers during the day, and discussing, chatting and mingling during the night, with too little sleep in-between high-wire the brain in a very creative and inspiring fashion. The first time I experienced it, weeklong camping on rock festivals was still fresh in my memory, and that experience was what an anthropology conference reminded me of.

Are there some blog posts I haven’t seen? Something about EASA 2010 you want to share?

The Secret Society of Anthropologists

What’s the point of anthropology conferences?

Conference Podcasting: Anthropologists thrilled to have their speeches recorded

Anthropology and the World: What has happened at the EASA conference (2006)?

This entry was posted by admin and filed under anthropology (general).

Very true, very true. I thought it was a great conference (we’re not called *social* anthropologists for nothing) though I couldn´t stay for all of it. I agree it´s a pity so little has transpired online. If it´s any consolation, we´re planning a joint media anthro + digital anthro follow-up discussion via the media anthropology mailing list towards the end of this month (sep 2010). As usual, we´ll then put a PDF transcript of the discussion on our site, http://www.media-anthropology.net/index.php/e-seminars

Perhaps some of us anthros should agree to blog about the next easa conf so that we can get a bit of a conversation going that cuts across specialist interests?

Stephane Voell—not a woman, actually. A very insightful ethnographer of Georgia who happens to be a man.

@Elizabeth: Ah sorry, fixed. Thanks! (I might have read “Stephanie"…)

@ John: Thanks for the information! Yes, let’s hope there will be more conference blogging, maybe also conference youtubing etc! And what about inviting media? Or some open meetings addressed to the wider public etcetc?

Yes, I suppose what’s missing is an EASA web forum/online meeting point of some sort where these ideas could be discussed and pursued prior to a conference. The various EASA networks are good for subdisciplinary interests, Savage Minds is mostly North American, the Open Anthropology Cooperative is global and open to anyone, etc. What we don’t have yet is an interactive EASA presence online.

This won’t be difficult to set up?

Perhaps not to set up, but to make it sustainable would require (as always) a lot of work by a committed hardcore. Any EASA postdocs out there willing to take this forward?

Sure. Look here at Neuroanthropology, totally different the way a conference has been covered. You can spend hours following all the links!