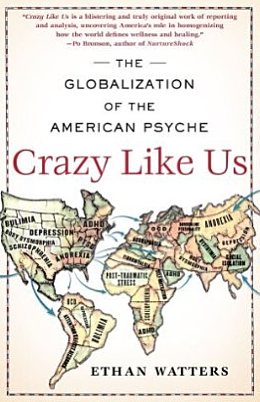 As Greg Downey at Neuroanthropology.net, I was kept awake until late at night by an article in the New York Times Magazine - yesterday for reading, today for writing. It is a fascinating article about a kind of globalisation that isn’t talked about much outside the university, written by Ethan Watters, author of Crazy Like Us: The Globalization of the American Psyche, released two days ago. It’s about the globalisation of the Western conception of mental health and illness

“We have for many years been busily engaged in a grand project of Americanizing the world’s understanding of mental health and illness", he writes. “We may indeed be far along in homogenizing the way the world goes mad.” And the idea that our Western conception of mental health and illness might be shaping the expression of illnesses in other cultures is rarely discussed in the professional literature.”

Western conceptions of mental health? Well, as anthropologists stress, illness is not only about biomedicine. It’s not only about parts of the body that no longer work. Our brain is not a batter of chemicals that “needs a fine chemical balance in order to perform at its best” (advertisment for the antidepressant Paxil).

(M)ental illness is an illness of the mind and cannot be understood without understanding the ideas, habits and predispositions — the idiosyncratic cultural trappings — of the mind that is its host. (…)

What cross-cultural psychiatrists and anthropologists have to tell us is that all mental illnesses, including depression, P.T.S.D. and even schizophrenia, can be every bit as influenced by cultural beliefs and expectations today as hysterical-leg paralysis or the vapors or zar or any other mental illness ever experienced in the history of human madness. (…)

In any given era, those who minister to the mentally ill — doctors or shamans or priests — inadvertently help to select which symptoms will be recognized as legitimate. Because the troubled mind has been influenced by healers of diverse religious and scientific persuasions, the forms of madness from one place and time often look remarkably different from the forms of madness in another.

Contrary to popular belief, “Western” biomedicine is not culturally neutral either:

The ideas we export often have at their heart a particularly American brand of hyperintrospection — a penchant for “psychologizing” daily existence. These ideas remain deeply influenced by the Cartesian split between the mind and the body, the Freudian duality between the conscious and unconscious, as well as the many self-help philosophies and schools of therapy that have encouraged Americans to separate the health of the individual from the health of the group.
(…)
“Western mental-health discourse introduces core components of Western culture, including a theory of human nature, a definition of personhood, a sense of time and memory and a source of moral authority. None of this is universal,” Derek Summerfield of the Institute of Psychiatry in London observes.

American researchers and institutions run most of the premier scholarly journals and host top conferences in the fields of psychology and psychiatry. Western drug companies dole out large sums for research and spend billions marketing medications for mental illnesses. In addition, Western-trained traumatologists often rush in where war or natural disasters strike to deliver “psychological first aid,” bringing with them their assumptions about how the mind becomes broken by horrible events and how it is best healed.

The export of Western biomedical ideas, Watters explains, can have “frustrating and unexpected consequences", for example marginalization of people with “mental heath problems". People with schizophrenia in some developing countries appear to fare better over time than those living in industrialized nations.

Several studies, Watters writes, suggest that we may actually treat people more harshly when their problem is described in biomedical disease terms, when we treat mental illnesses are “brain diseases” over which the patient has little choice or responsibility, when the disease has according this model nothing to do with factors in the outside world like unemployment, racism, larger societal structures that lead to loneliness, despair, depressions:

It turns out that those who adopted biomedical/genetic beliefs about mental disorders were the same people who wanted less contact with the mentally ill and thought of them as more dangerous and unpredictable. This unfortunate relationship has popped up in numerous studies around the world. (…) “irrespective of place . . . endorsing biological factors as the cause of schizophrenia was associated with a greater desire for social distance.”

In Zanzibar, in a group of people with “Swahili spirit-possession beliefs", the illness was seen as the work of outside forces, it was understood as an affliction for the sufferer but not as an identity according to research by anthropologist Juli McGruder:

For McGruder, the point was not that these practices or beliefs were effective in curing schizophrenia. Rather, she said she believed that they indirectly helped control the course of the illness. Besides keeping the sick individual in the social group, the religious beliefs in Zanzibar also allowed for a type of calmness and acquiescence in the face of the illness that she had rarely witnessed in the West.

>> read the whole article in the NYT Magazine

The article was published last Saturday. The same day, Greg Downey wrote Exporting American mental illness, an example for great anthropology blogging. And the day after another fascinating blog post by Eugene Raikhel at Somatosphere: The globalization of biopsychiatry with lots of links to related medical anthropology studies.

Nearly at the same time, medical anthropologist Michael Tan has written about the same topic in his column Pinoy Kasi in the Philippine Daily Inquirer. He writes about “special children", children with what Americans call “global developmental delay” or GDD. This diagnosis does not make sense in the Philippines:

The problem here is defining a delay. (…) For example, around the area of language development, you will find books that say a child should have a vocabulary of around 200 words by the age of 2. I can imagine some of my readers beginning to panic now, as I did when I first heard that standard. Imagine me in the middle of the night doing an inventory of my son’s vocabulary and not even reaching 50 (…)
But the anthropologist in me protested that we don’t have studies in the Philippines that established the norm, and given that all our children are growing up in households with at least two, and often more, languages, there’s bound to be some “delay.” As you might have guessed, my son, who is now 4, cannot stop jabbering, and in three languages at that.

Where shamans understand colonialism as sickness

Why anthropologists should politicize mental illnesses

The Anthropology of Suicide

This entry was posted by admin and filed under culture traditions, globalisation, medical anthropology / ethnobothany, books.

Very interesting post. You may also find the article “Language and globalization” by Norman Fairclough insightful as well - it talks about the globalization as well as globalizing effects of language/ discourse.

Thanks! I found a review here