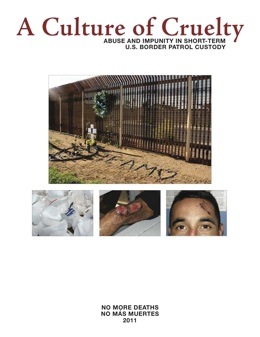 They beat children and adults during apprehensions and in custody, they deny people with life-threatening medical conditions treatment, separate family members and confiscate their belongings.

“We were held with another woman who was coughing so badly that she threw up violently, over and over. The others in the cell called for help. An officer came over and said, ‘Que se muera!’ - ‘Let her die!’”

Two months ago anthropologists Rachel Stonecipher & Sarah Willen alerted the public on the Access Denied blog about the abuse of migrants on the U.S–Mexican border.

Now, anthropologist Randall McGuire draws our attention to a recently published report “A Culture of Cruelty” that documents the “systematic abuses of human rights” by U.S. Border Patrol along the U.S.-Mexican border.

McGuire, who is the author of Archaeology as Political Action, writes:

This report demonstrates that the Border Patrol systematically abuses people in short-term custody and that existing policies and standards inadequately address a culture of impunity within the agency. Rather than these abuses being the work of a few rogue agents, the Border Patrol has become a rogue agency. The report draws on interviews with almost 13,000 deportees conducted over 2.5 years. (…)

Despite this fact, inadequate procedures exist within the Border Patrol for identifying and correcting systematic abuse. The abuses continue as part of United States border policy. The border wall forces migrants into perilous deserts and mountains.

Since 2008, the number of migrants crossing the border has fallen precipitously. But, the number of people dying in the desert has remained constant. The systematic abuses of human rights and the culture of cruelty in the Border Patrol directly reflect a border policy designed to maximize the risks to migrants’ health and lives.

The report was produced by the organisation No More Deaths. One of its members is anthropology student “Corbett” who on his/her (really good!) blog “The Wild Anthropologist” gives us a summary of the findings.

The whole report can be downloaded from the website http://www.cultureofcruelty.org

It hasn’t received much attention from mainstream media. And when Reuters writes about the report, they use the authorities’ perspective and describe the victims of abuse as “illegal migrants”, as criminals. The difference to the coverage in the independent media publication In These Times is striking.

As “The Wild Anthropologist” writes:

The term “Illegal” serves to dehumanize people who, even though they are within the country without the approval of the US, are guaranteed human rights by the 14th Amendment: “…nor shall any State deprive any person of life, liberty, or property, without due process of law”.

Deadly migration: The ignored health crisis on the US-Mexican border

Research in refugee camps: Too political for anthropology?

Online: On the Margins - An Ethnography from the US-Mexican Border

This entry was posted by admin and filed under politics, Us and Them, Northern America, migration.