What about presenting research findings with cartoons? A few days ago, anthropologists Aleksandra Bartoszko and Anne Birgitte Leseth published a research report as a comic book - together with cartoonist Marcin Ponomarew. And it was a success! Take a look at here https://anthrocomics.wordpress.com

I’ve asked Aleksandra Bartoszko to write some words about it for us. She is one of the first fieldbloggers (check her blog here http://antropyton.blogspot.com ) and has contributed with several posts here at antropologi.info, among others Pecha Kucha - the future of presenting papers? and - in Norwegian - a series about anthropology and art

The Anthropological Comic Book - an alternative way of reaching the audience

What if people don’t get it? How will they interpret it? What will the anthropologists say? – we asked ourselves before publishing the comic book. Not without fear. Not without doubts. Anthropology is about writing. But comics, these funny stories in a newspaper that amuse us during breakfast reading – are they a valid form of presentation of ethnographic findings?

“Public Space, Information Accessibility, Technology, and Diversity at Oslo University College” was a project which I, together with Anne Leseth, started in 2009.

We conducted our fieldwork at the campus of the college to assess the friendliness and accessibility of localities and information services in terms of social and cultural diversity. When we told our colleagues about our work, some of them reacted: “Oh, yet another report that nobody will read”. Not an encouraging attitude, but it challenged us to figure out an alternative way of reaching the audience.

We needed something that would attract attention of people who were “fed up with all these reports” on the multicultural environment, integration, exclusion and inclusion. So we decided to present our findings with a twist. We decided to make an anthropological comic book.

The process of making the comics was challenging yet extremely rewarding. Before we even started to worry about the reactions of the readers and the anthropological community, we asked ourselves how to make an illustrated ethnography.

While working with cartoonist Marcin Ponomarew we experienced something new, the experience that was not possible before – what our readers see when they read our ethnographies. How do they interpret our descriptions, how do they visualize our informants and their environments, and whose version is more real? “The dead of the author” was closer than ever.

We gave Marcin manuscripts. Some drawings he sent us back were very close to what we (or everyone of us) imagined and saw during the fieldwork, some were completely different. Yet, was his graphic presentation less real than if I had drawn the story? We worked with many versions of every story so as to get “the right picture”, to translate ethnography into words and words into pictures. This experience of triple translation gave me a new understanding of relation between the descriptive work of the author and the imaginative process in the reader’s head. As far as I am concerned, writing ethnography will never be the same as it was before this experience.

The book turned out to be a collection of ethnographic situations. Some of the drawings represent situations that we have observed; some of them are situations that we or our informants have experienced. They are often representations of emotions and feelings. A few of them are representations of stories we were told and some of them represent our analysis of documents and situations at the campus. Just as in written ethnography, we have manipulated some situations so as to anonymize the informants. This process was carried out with the same level of precision and ethical consideration as would be performed with written ethnography. Our goal was to tell a trustworthy story. 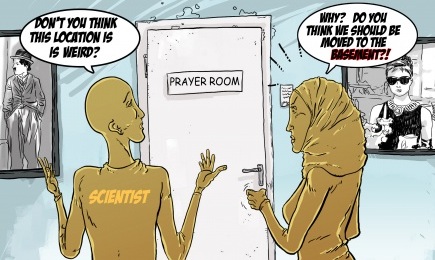 While working on this collection, various storylines, narrative arcs, drawings, and so forth, we were faced with a series of esthetic, philosophical, and ethical choices. We not only interpreted our ethnographic findings but also presented our view of the world. In some instances, we used irony and humor to clarify situations. These forms of expression also represent our informants’ subjective experiences. They reflect the tone, emotions, and comments that were expressed by the students and employees during our conversations with them.

This book, in both its form and content, breaks with the traditional way of presenting ethnography. Traditionally, anthropology has been a written enterprise. Writing is perceived as the most scientific form of representation of social life. However, other forms of representation exist — not only in other disciplines (like art) but also within anthropology and social sciences.

Anthropological findings have been presented in such forms as photography, film, and material exhibitions. Anthropologists are becoming increasingly inspired to branch out from the written word and use other forms of expression to present their findings. We have learned that there are various ways in which knowledge can be imparted and findings can be communicated. It is well known that the scientific standards of visual anthropology are equivalent to those of the written one.

The challenges related to visual presentation, as well as the lack of anonymity in those products, have been discussed, and these issues remain problematic. However, we believe that the comic book format, with its convincing visual style and preservation of anonymity (i.e., informants do not have to reveal their identities on screen or in photos, thus preserving their anonymity) may be a great solution. 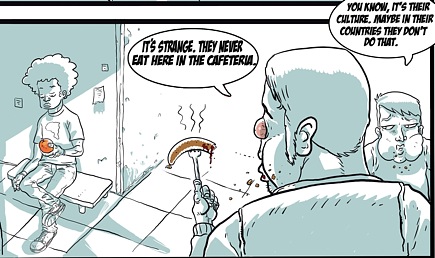 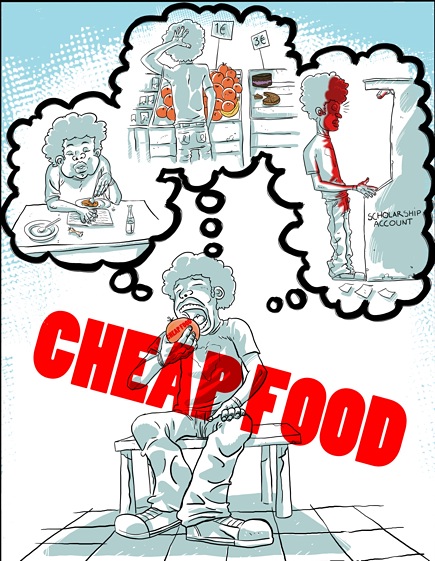 The goals of this comic book were not only to inform and educate but also to entertain and provoke discussion among readers. While working on this collection, we endeavored to set a tone of openness so as to promote reflection and interpretation. In so doing, we hoped that the comic book would involve readers in the dynamic process of learning and create a debate.

Did we succeed? Judging by the comments we received from the public – yes. We received positive feedbacks from both students, employees at the college and fellow anthropologists. Not only did they concern the esthetical values of the comics or the innovative way of presenting research, but what’s most important we received feedbacks on the issues presented in the comics.

We have been told that the book made people reflect. “So this is how it works”, “I didn’t realize before, that stereotypes are also what I do every day” and “This opened my eyes on the integration issues”, we have heard from the readers. I believe that this is because of the form of presentation we have chosen.

People tend to better understand the complex issues when they are visible. Literally. Sometimes we need to see ourselves in a mirror to see ourselves at all. These comics were like a mirror that made people reflect upon the social and cultural issues without the distance which written texts often are creating.

So, yes, we achieved what we hoped for. If this collection will help to improve the learning and work environment at the college is not entirely up to us, but we shed a light on challenges that need to be solved.

I would not say that comics are appropriate to present work engaged in theory development. But is every anthropological text about theory? We read so many articles, monographs, reports and listen to conference papers which actually present nothing more than ethnographic description. Are they less scientific? Well, this questions should be answered by anthropologists in the nearest future. For if pictures tell and do just as much (or more) as words, we should take a serious look at the condition and purposefulness of writing in anthropology and academia in general.

The Anthropological Comic Book is available online at http://anthrocomics.wordpress.com

Artopologist: A collective of artists and social scientists

Manga instead of scientific paper: How art enriches anthropology

This entry was posted by admin and filed under anthropology (general), Visual Anthropology, art, interdisciplinary.

As an Anthro student I love it, as a comic book letterer I’m aghast. Entirely the wrong font to use for dialog, it breaks my heart

This is very interesting and i really want to learn about how to applying comic as a research tools in anthropology. I think comic very useful to make people talk about their value, belief, vision. With comic, people can describe themselves, and share their ideas about their life (past, present and future life). Comic also can be used as an instruments for participatory research in anthropology and become media to encouraging people in discussion some issues like local politic, climate change, poverty, atc. This is very helpul for them in doing self-reflection and steering brain storming to find some solution for their problem. The rule of the Anthropologist here is a facilitator as well as a researcher.

I have been searching quite a while for evidence of anthropologists publishing work as ‘graphic ethnography’ or ‘ethnographic comix’ or however the genre shall be named. This is such a great contribution to the budding research community that struggles to justify creating rich ethnographic accounts that are read by only a handful of like-minded researchers. I have the same sentiments as Chamy, that ethnographic comix is a potential instrument for participatory research, which has been demonstrated in a few public health interventions I know of. Looks like I’m a little behind the times though - this was released in 2011! Have you continued to pursue this method, or do you know of others who have done this sort of work as well?