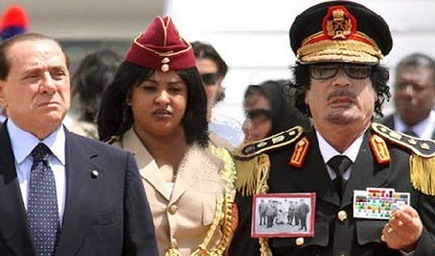 (draft) Have you tried googling “Japan” “earthquake” and “no looting”? Or “Libya” and “tribes”? It’s no big surprise to see stereotypical representations of other people in the news, but the ongoing historical developments in Libya and Japan might provide especially interesting examples.

Libya is for many journalists and experts a “tribal” country.

“Many Americans pride themselves on God and country. In Libya, it’s God, tribe, then country", explains CNN and quotes anthropologist Philip Carl Salzman who says “Libyans have a strong loyalty to tribe. A tribe provides welfare in times of need,” he said. “They have a collective responsibility.”

In the article In Libya the revolution will be tribalized (The Globe and Mail), Khalil Ali Al-Musmari, a retired professor of anthropology and sociology, said the foreign media have often crudely misrepresented the nature of “tribal power” in the country, by talking about tribal leaders as though they still commanded the same obedience they did in ancient times. Educated Libyans in coastal cities, he says, make their own political decisions and do not feel obligated to follow their tribal elders. Talk of tribal divisions in the country is dangerous.

Japan is for journalists and experts a calm and spirutal country. Most meanstream papers around the world run stories like “Why is there no looting in Japan in earthquake aftermath?”

A lack of looting in Japan?

“The layer of human turmoil - looting and scuffles for food or services - that often comes in the wake of disaster seems noticeably absent in Japan", claims CNN and several experts give culturalist explanations. Among them Merry White, an anthropology professor at Boston University who studies Japanese culture. “Violence, and taking what belongs to others, are simply not culturally approved or supported", she says.

A great deal of culturalism can be found in the article Japan Earthquake Feature: Japanese stoicism part of the culture in the National Post.

The paper writes about “the extraordinary sense of calm on the Japanese archipelago amid conditions which in perhaps any other place would have led to chaos".

“The Japanese culture encourages a heightened sense of individual responsibility, but also a very powerful sense of solidarity, and that is a very powerful combination”, says sociologist Frank Furedi.

“In Japanese culture, there’s a sort of nobility in suffering with a stiff upper lip, in mustering the spiritual, psychological resources internally,” explains anthropologist John Nelson.

Theories abound as to what makes the Japanese so resilient and willing to cooperate. Some cite the centuries-old need to work together to grow rice on a crowded archipelago prone to natural disasters. Others point to the hierarchical nature of human relations and a keen fear of shaming oneself before others.

“It strikes me as a Buddhist attitude,” Glenda Roberts, an anthropology professor at Tokyo’s Waseda University, said. “Westerners might tend to see it as passivity, but it’s not that. It takes a lot of strength to stay calm in the face of terror.”

There are even stories about the lack of a Japanese word for looting, as the bloggers at Language Log have observed. “As usual, the attempt to diagnose and explain culture cheaply in lexical terms is empirically as well as conceptually weak", Mark Liberman comments. Further down in the comment field, Chris Kern deconstructs the notion of the non-looting Japanese:

Looking at Japanese news articles on the disasters is the easiest way to disprove this. There’s one article that discusses the American news media’s wonder over the lack of looting with the following headline:
「なぜ略奪ないの？」＝被災地の秩序、驚きと称賛－米
“ryakudatsu” is used as the translation of “looting” there.

But there are other articles that talk about looting that actually has been occurring in Japan in the wake of the disasters, and they use “ryakudatsu” and “goudatsu”

But there has been looting, and these stories don’t seem to be translated into English or reported on English language news sites as the BBC explains.

What are the consequences of this kind of reporting?

These news stories that contrast peaceful Japan with violent Haiti have often triggered racist discourses in the comment fields.

Japan is one of the least “diverse” countries in the world. This gives them solidarity and sense of nationhood that “multicultural” societies don’t have, it allows them to pull together for the common good in times of adversity. Contrast that with “multicultural” New Orleans response to a natural disaster. It seems like unity is a strength and “diversity” is a weakness.

Johann Hari challenges these stereotypes in her comment The myth of the panicking disaster victim. The evidence gathered over centuries of disasters, natural and man-made, is overwhelming, he writes:

The vast majority of people, when a disaster hits, behave in the aftermath as altruists. They organise spontaneously to save their fellow human beings, to share what they have, and to show kindness. They reveal themselves to be better people than they ever expected.

But what about the violence in New Orleans after Hurricane Katrina?

Remember the gangs “marauding” through New Orleans, raping and even cannibalising people in the Super-Dome after Hurricane Katrina? It turns out they didn’t exist. Years of journalistic investigations showed them to be racist rumours with no factual basis. Yes, there was some “looting” – which consisted of starving people breaking into closed and abandoned shops for food. Of course human beings can behave atrociously – but the aftermath of a disaster seems to be the time when it is least likely.

“The cultural explanation for looting just doesn’t cut it, and at its worst it shows signs of racism", David A. Love explains in his piece From Haiti to Japan: Is looting economic or cultural?:

As an African-American who lived with a Japanese family as a high school exchange student, majored in Japanese studies in college, and later rode the Tokyo subway every day to work in a Japanese corporation, I have some thoughts. I say it is economic, but it isn’t quite that simple, because other circumstances are at play.

How racist is American anthropology?

The Culture Struggle: How cultures are instruments of social power

Thesis: That’s why there is peace

This entry was posted by admin and filed under Us and Them, Africa, Asia, anthropology (general).

One quick correction: Johann Hari is a he.

Looks like a problem with generalizing. I mean, it is not untrue that atleast some Japanese are stoic and spiritual. The problem is that people think that all Japanese are like that. It is basically essentialism. But to go so far as to call it racism, I don’t know. More like ethnocentrism maybe. Us/them and all that. I believe social psychologists have a term for it. Over-determinating typification or something like that.

Hi Robin, totally agree with you. I haven’t called it racism. I wrote that these stories often trigger racist discourses in the comment fields. But you inspired me and made me think of the concept of banal nationalism. Banal stuff like flags or national news and weather remind us “where we belong". So we might call these kind of representations “banal racism"? Stories like these remind us of the way humanity is categorized?