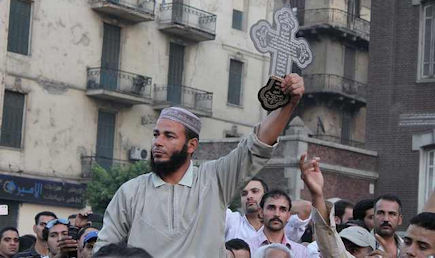 (preliminary notes, still in progress, last updated 16.10., 00:30 ) As everybody else, I am trying to make sense of Sunday night’s outbreak of violence in Cairo. While I was - unsuspectingly - walking through the streets of Cairo, trying to find the pasta stand I stumbled upon a week ago, the military was massacring protesters less than ten minutes by foot away from me at the Maspero State-TV building. At least 27 people were killed, more than 300 were wounded during a protest against religious discrimination and a recent destruction of a church in Upper Egypt.

It is both interesting and disturbing to see how the event has been covered by international mainstream media in comparison to local and social media.

International media has framed the clashes mainly as a religious conflict while they also could have chosen a totally different perspective: instead of “Muslims against Christians”, they could have chosen “the army against the people”. They could have described the clashes as conflict between forces who support the pro-democracy revolution (the people) and those that rather oppose it (the ruling Supreme Council of the Armed Forces, SCAF), as a conflict more of power than of religion.

UPDATE:“The atrocious killings in Maspero are not so much sectarian as a staging point in a full-scale counterrevolution“, writes sociologist Mona Abaza in Ahram Online

UPDATE: This sectarian language in Western media is, as Paul Sedra explains on Jadaliyya, not only inappropriate but dangerous.

As several local commentators stated, the protesters who were attacked by the military were not exclusively Christians.

Many Muslims joined the clashes, and fought against the army and police. At one point a Muslim cleric carried a cross over the 6 October Bridge, leading Coptic protesters in marching on Maspero [the TV-building].

The demonstrators chanted repeatedly: “Muslims, Christians.. One hand!” and denounced Mubarak’s minister of defence, who is controlling the country now - Field Marshal Tantawi.

El-Hamalawy sees the current attacks on the Copts as an “attempt by the ruling military generals to split the ranks of the Egyptian poor and pit them against one another”. The presence of Muslim protesters alongside Copts are according to him “a hopeful sign”.

“There were people on the streets from all different sectors of society. Copts, Muslims, other Christians, secularists, even Salafists. ”What united them was not anything to do with sectarian issues or demands but actually a frustration directed at the army for what they feel is the army’s betrayel of the revolution."

Social justice for all, including religious minorities, was one of the demands of the january revolution.

Omar Tarek, an activist and journalist, was one of the Muslim protesters. Around 300 Muslim and Coptic protesters were gathered at state TV-building Maspero, holding candles, chanting and calling for unity according to Daily News Egypt .

Omar Tarek told the newspaper that the Coptic cause is the same as the Muslim cause.

You can’t demolish a house of worship. (…) I am here as an Egyptian, supporting an Egyptian cause.

Headlines like BBC’s Copts mourn victims of Cairo unrest suggest that Muslims or secularists don’t care which is not true. Many muslims joined the Copts at funerals.

Amira Abdel Hamid was one them. He said to Daily News Egypt:

I am here supporting the families of the martyrs and I was hoping that a lot of Muslims would make it to show the whole world that it is not sectarian strife, but an army against its people.

During their march from the Coptic Hospital to the largest Coptic cathedral in Cairo, protesters chant, “Muslims and Christians are one hand!”, reports newspaper Al-Masry Al-Youm. And: “Down with military rule!” “This is not a sectarian conflict, this is a military massacre.”

Ahram Online writes about the funeral for Mina Daniel, a young Christian revolutionary “who never forgot the importance of Muslim-Christian unity”:

Hundreds of Egyptians who had never met Mina Daniel – or, in many cases, had even heard of him before his death – attended the young man’s funeral, chanting, “We are all Mina Daniel.” (…)

Following the funeral, hundreds of mourners, including both Christians and Muslims, solemnly headed to Tahrir Square bearing Mina’s coffin. 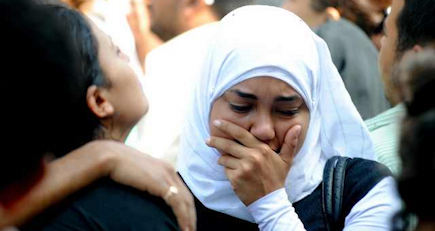 A Muslim girl who came to support her Christian friend after her brother was killed during the battles Sunday night. Photo: Lilian Wagdy, flickr

There is no doubt that Reuters and others are right when they write that Copts are discriminated. Even tourists like me are realising that the Muslim-Christian relationship is a sensitive issue. But the news agencies neglect to mention that many conflicts have been initiated and provoked by the regimes in power (“Divide and rule”).

Tom Heneghan, Religion Editor at Reuters, for example went so far to claim the following:

The clashes, in which Christians say they were fired on and charged down by armored vehicles, highlighted an irony of the Arab Spring that the region’s dictatorships may have been better guardians of minorities than budding democracies.

But in Egypt, many believe the recent clashes are a result of ousted president Hosni Mubarak’s policies, which nurtured sectarian strife, writes Heba Fahmy in Daily News Egypt.

While many are quick to point out the marginalization of Egypt’s Copts, less are inclined to label the country as a sectarian state.

Many observers have said that these underlying issues are often manipulated by authorities seeking to cling to power, an accusation often leveled against the Mubarak regime. Incidents such as Sunday night’s events are usually followed by widespread calls for national unity and shows of solidarity between Muslims and Christians.

“We now know a previous massacre, the bombing of the Church of the Two Martyrs in Alexandria in December, in which 21 were killed, was the work of Mubarak’s ministry of the interior”, explains Egyptian short story writer Ahdaf Soueif in the Guardian.

It was beyond sickening that a government would kill its citizens in an attempt to turn them against each other – and Muslims flocked to stand with their Christian friends at Christmas mass.

The attack on Egyptian Christians last Sunday “was not sectarian”, she writes, “this was the army murdering citizens.”

So instead of accompanying their articles with background information about Christians in the Middle East (BBC) or Christians under siege in post-revolution Egypt (AP / ABC News), international media could have chosen to highlight the role of the military generals in Egypt as for example CBS’ 60 minutes did. As bonus track one could add a feature about the role of the West, especially the U.S. as sponsor.

A number of critics say that Egyptian state television not only failed to help resolve the crisis, but actually played a role in aggravating the already-tense situation.

In an unprecedented move, broadcasters on state television at one point called on the Egyptian public to head to Maspero en masse to defend Egyptian soldiers from angry Christian protesters, thereby further fuelling the sectarian flare-up.

On top of this, Issandr El Amrani writes at the Arabist, the military cut off the live TV feeds of several satellite TV stations, including Al Jazeera.

Some more observations at the end

At the end of this already too long post, I’d especially like to recommend the analysis The Last Choice by Mahmoud Salem aka Sandmonkey, one of Egypts best English language bloggers I’ve read so far. He not only analyses the massacre but also discusses possible local and global consequences. Sandmonkey is ending optimistically with an account from the Sunday night clashes:

And then, strangely, both sides at the same time changed their chants to “One hand”, and both sides started chanting that fiercely, stopped fighting each other, and joined each other into one big marsh chanting “One hand, One hand”, and thus showing us that they made the right choice. They were presented with the choice between the Army and National Unity, and they refused to make that choice and collectively and organically made the only correct choice: Each Other. Egypt.

In the midst of the battle, they realized on a very basic level that they can’t chose one over the other, and that, even if they have prejudices, they really do not want to fight each other. There is a lesson in that incident for all of us, and it may just hold the key to our salvation.

Saba Mahmood: Democracy is not enough - Anthropologists on the Arab revolution part II

Thesis: That's why there is peace

Extremism: "Authorities -and not Imams - can make the situation worse"

The dubious behaviour of Western researchers sightseeing the “Arab Spring”

This entry was posted by admin and filed under politics, religion cosmology, Us and Them, Middle East.

If you would like to sign the petition to cut off Egyptian aid ($1.3B annually) from the United States unless Egypt brings the killers to justice, follow this link to WhiteHouse.gov.