Anthropologist Tereza Kuldova, author of many book reviews here on antropologi.info has recently defended her PhD-thesis Designing Elites: Fashion and Prestige in Urban North India". Now she has turned her thesis into a museum exhibition and an edited volume called Fashion India. Spectacular Capitalism.

antropologi.info: So you turned your PhD thesis both into an exhibition and then into an edited volume?

Tereza Kuldova: Yes, that is correct. At the Museum of Cultural History in Oslo (part of University of Oslo) where I work, we were just in the process of restructuring the museum and developing new creative vision for future research based exhibitions, when I proposed to translate my PhD into a visual form. 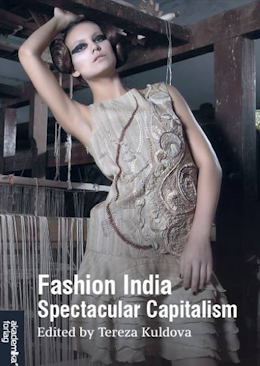 – I wanted to create an exhibition that is about Indian fashion as much as about Indian society and the context of fashion production, capturing the complexity of the relationships of production and consumption - the opposite of the India: Fashion Now exhibition at Arken, Denmark, where they presented selected pieces by a handful of famous Indian designers on dummies, basically as art pieces, devoid of any social or economic context, a practice I tried to oppose in my exhibition.

– So I went on a curatorial hunt for the exhibition objects to India and spent one month shopping in New Delhi, Mumbai, Kolkata and Lucknow and shipping huge boxes of ethnographic artefacts and props for the exhibition to Oslo. In Kolkata I even commissioned life size glass fibre statues of Gandhi, Shah Rukh Khan, and goddess Lakshmi from the Kumartuli artisans. When I got back, I got a team consisting of conservators, photographers, PR expert, project coordinator, graphic designer and handyman to help me getting the exhibition together. I was then responsible for design, texts and the overall concept and organization. But I also got to nail things on the wall and got all messy painting and so on.

– The edited volume of the same title as the exhibition, Fashion India: Spectacular Capitalism, was based partly on a conference I organized in December 2012, The Indian Phantasm, where I invited some of my great colleagues working on contemporary Indian and popular culture, and then I invited some of the authors especially for the volume. However, each chapter is visually represented in the exhibition, so that the book functions as an in-depth extension of the individual exhibition windows and installations. 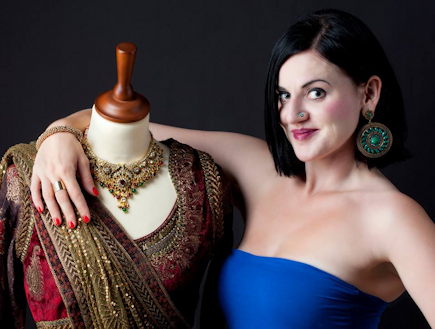 Tereza Kuldova: "We all need to understand how this multi-billion fashion industry operates and rethink our wardrobes accordingly." Photo: Kirsten Helgeland

– It's a book with some catchy titles! Was “Fashion India - Spectacular Capitalism” your idea? What was the idea behind the title of the book?

– Well, it was my idea in a way… In fact, I was reading Gilman-Opalsky's Spectacular Capitalism: Guy Debord and the Practice of Radical Philosophy, while putting the exhibition together and the concept just seemed to capture what most of the authors in the volume were relating to and no less, what I have been researching.

– Spectacular capitalism refers to the dominant mythological understanding of what capitalism is and what it does in the world, i.e. to a "mythology about capitalism that disguises its internal logic and denies the macroeconomic reality of the actually existing capitalist world"(Gilman-Opalsky 2011: 17), such as the classical statements like "anybody can make it if they work hard enough" or "capitalism will eradicate all inequalities."

– What is spectacular about capitalism?

– There is nothing spectacular about capitalism, except for its mythology.

– It was precisely this mythology that I tried to unpack both in the exhibition and through the volume. While we may cynically take distance from such statements, they are some of the most powerful illusions to which for instance the Indian business elites subscribe and reproduce in their everyday acts. I think that each author in the volume addressed some part of this powerful mythology, be it from historical, anthropological or aesthetic perspective. 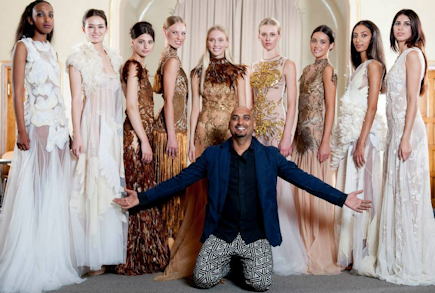 Samant Chauhan with his collection during the opening of the exhibition Fashion India at the Museum of Cultural History, University of Oslo, 13 spetember 2013. Photo: Adnan Icagic

– How it is addressed in the book?

– For instance, I talk about the notorious meritocratic ideal, and the way it becomes part of the self-justification of Indian elites. The problem with meritocracy is that it systematically legitimizes social inequality by arguing that success depends on the individual's abilities and talents, while ignoring all together the structural conditions of opportunity in the first place.

– Shamus Rahman Khan, in his study of America's elite St. Paul's college, argues that the US lives in an era of democratic inequality, the same applies for India. Democratic inequality refers to a state of affairs in which a certain amount of diversity (few publically recognized self-made men, such as selected famous designers) is combined with the dominant narrative of meritocracy thus creating an illusion of an open society, something that obscures the underlying structural inequalities that are being systematically perpetuated.

– "Laughing at luxury and mocking fashion designers" is the catchy title of one of your contributions. That makes me of course wonder who and what you are writing about!

– This chapter addresses the relationship between designers and village based craftswomen in the chikan embroidery cottage industry in Lucknow, who partake in the production of the high-end luxury fashion pieces, but who resist the patronizing discourses of the designers, who position these women as "poor, illiterate, and in need of rescue" (while positioning themselves as the very rescuers providing precious jobs).

– These women often reverse the assumed dynamics of dependency on the powerful urban designers, by showing the designers that it is them who are dependent on the women's craft skill and not the reverse; showing them that without them the designers are nothing. The village women often mock these designers and laugh at the way they run after money, are always stressed and under pressure, never laugh and so on.

– The city is here opposed to the village, which is paradoxically idealized by the villagers themselves, against all its lacks; the urban poverty which creates real dependency on money with its stress, exploitation and hectic life are increasingly recognized as undesirable. However, it must be said that this is a slightly gendered perspective, as the women appear to idealize the village life far more than men, who tend to focus on the lacks and wrongs.

– The women also often laugh at ideas such as "national pride" or "heritage" and the fact that they are so celebrated within the nationalist discourse and yet remain invisible to the state. So the chapter investigates some of these ironic reversals in the relation between designers and these craftswomen.

– And Paolo Favero writes about How to spend a few hours waiting for a delayed flight in the middle of the night at the Delhi airport and receive an ethnographic enlightenment?

his is a very enlightening and entertaining chapter, where Paolo traces the modern history of Delhi, while reflecting over his own engagement with Delhi throughout his research career - all of this triggered by the newly refurbished Indira Gandhi International Airport, that becomes a material, aesthetic and as such also ideological representation of the current search for Delhi's identity as a powerful global city obsessed with search for and display of "Indianness".

– Paolo then walks us through some of the iconic places in Delhi that reflect these trends. I then describe some of the same process in another chapter of mine in the volume "The Maharaja Style: Royal Chic, Heritage Luxury and the Nomadic Elites".

– What is so special with the newly refurbished Delhi airport?

– The Delhi airport has been then transformed into a glamorous gallery-like, or if you like, Disneyland like, space displaying the opulence of Indian heritage, a clear search for identity within the global order.

– This space can also be read, such as Nilanjana Mukherjee does in one of the book chapters, through the historical lense of the nineteenth century world exhibitions with their temple paviollions, through the royal durbars and the emergence of shopping arcades, all predecessesors of contemporary theatrical fashion shows or miss universe and the like.

– At the Delhi airport, this spatial aesthetics is used to strategically re-brand Delhi as the city of the future global rulers, the hypermodern hub from which poverty or any social problems are photoshopped, at the same time as it re-invents its past in order to project it into the future, thus creating dominant (often branding) narratives of what it means to be Indian, with iconic symbols like Gandhi, traditional handicrafts and so on, symbols that can be easily consumed and displayed in order to show one's belonging.

– You can see these dominant tropes all around, in one space, all bombastically mixed up. Another chapter, by Nemesis Srour for instance looks at the related changing masculine ideal in the Bollywood cinema, that of the powerful, muscular, global Indian, who at the same time remains firmly rooted in tradition, while being the prototypical "consumer patriot".

– What can people who are neither experts in fashion nor in India learn from your book?

– Well, the book is written in an accessible language, and it is accompanied by numerous images, so the readers can get a glimpse of contemporary India through fashion and popular culture and realize that researching fashion means researching society and economic systems at large. It is not a matter of few designer heroes or fashion magazines. To the contrary, it concerns us all in most pressing ways.

– A short/long answer to this would be T. Hoskins's book Stitched Up: The Anti-Capitalist Book of Fashion. I think we all need to understand how this multi-billion industry operates and rethink our wardrobes accordingly.

– And so even though the stories may appear local, they speak to processes that are global, and you can easily see how what is happening in India is uncannily replicated in our own contexts.

– What kept you studying Indian fashion for so many years?

– Maybe precisely the fact that it is not about fashion - fashion is just a lens, a starting point for understanding commercial cultural, design, art, capitalism, desire, prestige, role of material culture, emerging economies, social networks, various forms of capital, emotion and affect, seduction, sexuality and erotics and so on.

– How is your life after the PhD? Still at the museum?

– Yes, for a while. Since I delivered my thesis on time, which happens to be rare in Norway, I received a one year extension grant – that is when I put together the exhibition and now I turning my thesis into a monograph which should come out next year.

– And what do you plan to do in future?

– If everything goes well, I want to start up a new research project on emerging fashion cities and the relation between India and the Gulf, in particular Abu Dhabi.

– Come and check out the exhibition in Oslo, it is on until 13th of June

The book is available via Akademika forlag in Norway or Amazon (US). For more information see Tereza Kuldova's website

>> My look at Tereza Kuldova's master’s thesis about the Chikan embroidery industry in India: That’s why there is peace

>> Her book review No fashion outside the "West"?

This entry was posted by admin and filed under Asia, books.