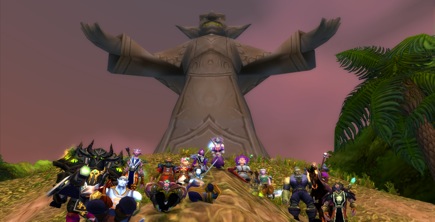 The anthropologist and his virtual research team in World of Warcraft. Photo: Colorado State University

It’s always refreshing when anthropologists challenge wideheld assumptions, for example about video- and onlinegames. Many video game studies focus on the negative and addictive aspects of game play.

In two recent studies, Jeffrey Snodgrass and his team show, that video game playing can be healthy.

In a press release, the anthropologist says:

The idea is that if you lose yourself, you escape. So it’s deeply relaxing, what some gamers describe as akin to meditation, or at other times positively challenging and stimulating, like a great chess match where you’re actually one of the pieces, and we show that there are strong associations between these various states of consciousness and the game’s health benefits.

But it is important to note that the escape must be controlled and temporary to be positive so that it leads to rejuvenation rather than simple problem avoidance, which in the end only increases the experience of stress.”

He hopes that people will start to understand that addiction is only one side of video game usage.

According the press release, “both articles are currently available online". That’s true, but they’re behind a pay wall.

This entry was posted by admin and filed under cyberanthropology, internet.